Want to imitate the examples Sts. Peter and Paul? Don’t hesitate to speak up! 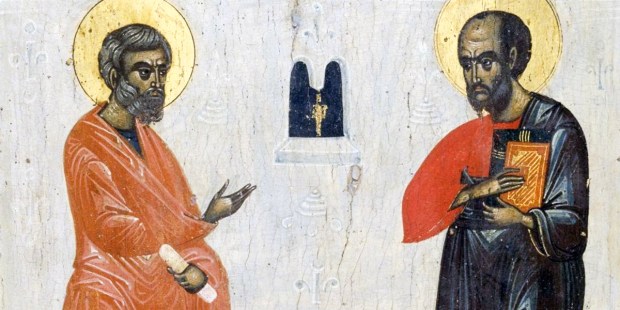 Today, let us call on the apostolic spirit deep within us!

Today we celebrate the two pillars of the Church who shared the same mystery.

There is a narrative that juxtaposes Peter and Paul: Peter represents the institutions and bureaucracy of the Church, while Paul represents its charisma or spirit. While the institutions are necessary and restrictive, the charisma is individualistic and creative:  Peter commands but Paul inflames and inspires.

This narrative is invalid, however. Peter is just as charismatic (his role in the Gospels is prominent) as Paul is institutional (all this former Pharisee did was found churches). They were both invested with charisma and organizational skills through their vocation as apostles. So, their juxtaposition must be reexamined. It is based on a false premise that freedom cannot be exercised under any kind of authority.

Christians must never hesitate to speak up

Both Peter and Paul had strong personalities, a far cry from the sanitized versions with which we are sometimes presented. When they received the blessing from the Lord, they worked hard on their virtues and underwent transformation. Because generally men are stubborn, God’s grace only slightly modifies their character. But the more Christian we feel, the more genuine we becomes. Our natures illuminate both our faults and virtues. To be a true Christians we must speak up.

All their hard work would have come to nothing had Peter and Paul just searched for God. But they did more; they also gave Him and themselves to others. This was their gift and their calling: the vocation of all Christians is to follow the example of Christ.

In their deaths, doubly infamous for Peter (crucified upside down) and one worthy of a Roman citizen for Paul (decapitation), they offered themselves in an ultimate sacrifice. The Church owes its very existence to Peter and Paul. Let us all become a little like them.

Read more:
As the first pope, did St. Peter write any encyclicals?