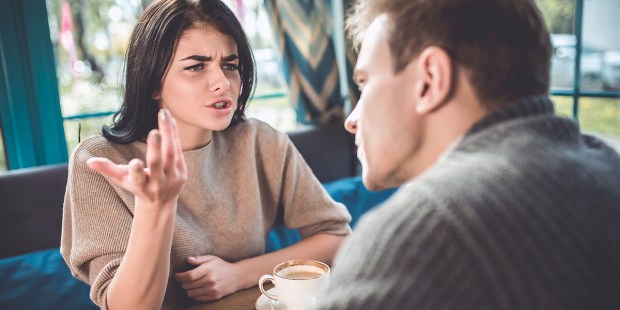 A little bit of humility and a shift in perspective can make all the difference.

Many a spouse has said, “It’s impossible to discuss anything with my husband/wife. They always think they’re right!” There are also those couples who both think they’re right and insist on sticking to their own point of view. And when you ask which of them started the argument, they’ll each tell you it was the other one. What to make of such behavior? And what can you do if these things arise in your own relationship?

Try to see what the other perceives as right

You can start by asking yourself where this need to insist on being absolutely right comes from. From a love of the truth, the need to assert oneself, or a lack of humility? Above all, we mustn’t forget that the reality is complicated. When faced with serious problems (a teen with anorexia, for example), the person who is able find the best solutions is clever indeed.

It’s good to have two points of view to try to take all factors into account. In most cases, if there’s a disagreement, it’s because each one is approaching the problem from a different angle. Imagine two people on opposite sides of a roadsign painted red on one side and white on the other. The one facing the red side will insist the sign’s red, and the other facing the white side will insist it’s white. They each have only half of the truth.

It’s the same for many marital disputes: each person perceives only one aspect of the truth. Since both points of view contain a part of the truth, couldn’t they try to reconcile things by meeting on common ground? Each of the spouses could say: “If my partner doesn’t see things the way I do, it’s because he/she sees an aspect of the problem that I’m missing. I’ll try to see what he/she sees perceives as right.”

Finally, two virtues are very useful in the life of a couple. First of all, empathy, a fabulous quality that presupposes the ability to shift the focus away from oneself, to leave one’s own points of reference aside for a moment to respectfully enter into the other’s way of seeing, and to make the other’s issues one’s own. And then, there’s humility. What person with an ounce of common sense, and knowing their own limits, is presumptuous enough to think they own the whole truth? Only one man only was able to say in all honesty that He not only knew the Truth, but that He is the Truth — and that’s Jesus Christ.

Read more:
How to be a better cheerleader in your marriage