Are you afraid of being stared at by others? Here’s how you can change that 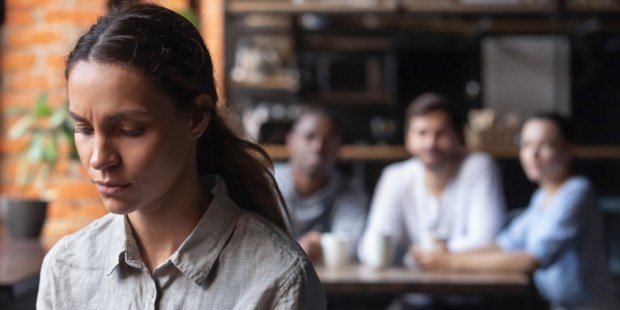 If you look a little more deeply, and use these Bible passages as a guide, you can overcome this fear.

If no one ever sees us, if we go unnoticed, it feels terrible. And yet it also makes us feel uncomfortable to be the focus of someone’s gaze, to be stared at, for no apparent reason. It is, of course, natural to wonder how others see us, and it would be unusual to never think about that. But if thinking and worrying about it turns into a main preoccupation, it can become toxic. If we’re so afraid of everyone’s opinion, it may be that we are looking at others in an inappropriate way as well. It’s not just a question of how others see us; it’s also about the way we see others.

Have you ever thought about purifying the way you see others? There is an array of ways to see others, depending on the situation … seeing timidly when it is a person who intimidates us; seeing arrogantly when it is a person we want to feel superior to; looking down on someone we are judging; being star-struck by a person whose affection we desire; looking at someone in a threatening way if we feel we have to defend ourselves, and more.

Have you ever thought that if you are sensitive to how others see you, then others are also sensitive to how you see them? We need to learn how to see others as well as how to react to the way others see us. The ability to see is something we learn so we can learn to purify the way we see others, because the way we see is not innocent. Every look carries a message. There is no neutral look, unless it is the look of a professional, like a surgeon who is deciding how to treat a patient and whose only goal is to help that person.

Purifying the way we see means learning how to overcome appearances in order to get to the hidden reality of the person we are looking at. In the Bible, when the prophet Samuel meets Jesse’s sons, each one bigger and more handsome than the last, each time he thinks he is standing before the future king. But the Holy Spirit tells him: “Do not look on his face, or on the height of his stature; because I have rejected him. For man does not see as God sees, for man looks at the outward appearance, but God looks at the heart.” (1 Samuel 16:7).

Jesus himself stated in no uncertain terms: “Everyone who looks at a woman with lust for her has already committed adultery with her in his heart” (Matthew 5:28). He doesn’t say that you have to keep your eyes closed to the marvels of creation; instead, he asks us to purify our gaze.

One way of seeing is discussed in the Gospel, where it says, “Jesus looked at him and loved him.” (Mark 10:21) We have to learn how to see others as we would like to be seen by them.

Jesus also says: “The eye is the lamp of the body. If your eyes are healthy,  your whole body will be full of light. But if your eyes are unhealthy,  your whole body will be full of darkness. If then the light within you is darkness, how great is that darkness! (Matthew 6:22-23). Purifying our eye to bring in light is an exercise in generosity and trust. It entails shedding futile fear. It implies dissolving all the possible errors in order to see others in a friendly, trustful, neutral way, a way of seeing that, be assured, they need.

Keep cool when being observed by others

The second thing to learn is to keep cool when others are watching you. It does no good to try to “interpret” what others are thinking, because more often than not we get it wrong. Nor should you go the other extreme of becoming completely indifferent, which would not be prudent and could even make you look quite insensitive. You have to train yourself to be free when others are observing you or, at least, not feel completely dependent on the way they see you. There is a way to be in command of yourself that can protect you from all the suffering and disillusionment, because it happens all too often that we become bitter at life from over-interpreting what was just a simple sideways glance!

It is possible to learn to have an appropriate attitude when others are observing you. It is a question of your inner life. Above all, you have to overcome your fears. Fear is what paralyzes us, it hypnotizes us like the hiss of a snake. Fear prepares us to be devoured or exterminated. The Lord Jesus comes to free us from this fear. The first humans, whom God called into being, lived in harmony with Him. This was described in the Bible in the image of a happy couple who lived under the gaze of God. Adam and Eve took that gaze as their life and their happiness. But sin changed the order of things. And the Bible describes it by specifically referring to the theme of the “seeing.”

There is more than one way to see things

The devil’s temptation is, firstly, a question of seeing. Adam and Eve no longer “saw” things as God saw them. The Tempter invites them to see Creation with different eyes (Genesis 3:5). And, in fact, that is what Eve says. She wonders if she is seeing things in the right way. And God lets her freely choose to change the way she sees things, herself and even Him. “The woman saw that the fruit of the tree was good for food and pleasing to the eye, and also desirable for gaining wisdom” (Genesis 3:6).

There are many possible ways to see things. God’s way of seeing is not the same as the devil’s. Again, God does not look at appearances — He sees the value of things and people. The man and woman let themselves be seduced. They preferred to see like the Tempter, not like God. And they suffered the consequences of their decision. The Bible judiciously says: “Then the eyes of both of them were opened, and they realized they were naked” (Genesis 3:7). In other words, they wanted to see and they saw themselves. They tried to see creation in an indiscreet way, they wanted to possess it, and they did. They saw their skin, which was now unbearable for them as they realized it would not protect them. But they also saw their hearts; they knew that, from then on, they would be vulnerable to the gaze of others. Their sin destroyed the beautiful inner peace they had been created for. Their gaze became clouded, distorted, and deviant.

The grace of God purifies our gaze

If everyone has difficulty being stared at by others, if we all are afraid of being seen in a negative light, it is caused by original sin. We humans were created to withstand the gaze of God and our fellow man. But sin destroyed this special gift. The mirror was broken. Adam and Eve assumed that God had certain intentions: “I was afraid because I was naked; so I hid,” says Adam (Genesis 3:10). In the same way, Cain was afraid of his brother Abel, and he looked at him with murder in his eyes, mistakenly assuming evil intentions on his part, and killed him.

When Jesus cured the blind man, he told him to wash his eyes in the water fountain called “Sent” (John 9).  With this gesture, he wants the man to collaborate in his own healing. The grace of God cleans our gaze, as it cleans our heart. The sacrament of penance in particular has the effect of purifying our gaze. It is through the grace of God that we are able to still be ourselves in the gaze of others, that we learn to leave fear behind, and to see others and love them.