Friday, April 24
Saint of the Day: St. Fidelis of Sigmaringen

“There is one Lord, one faith, one baptism” 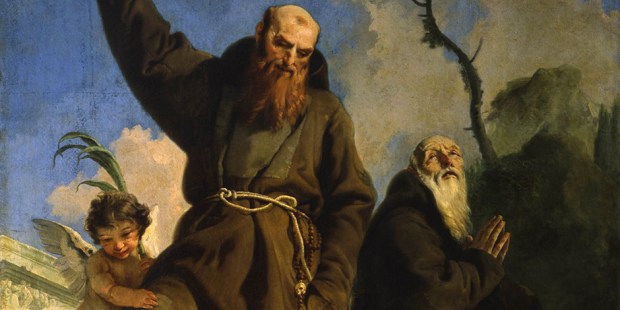 + After earning doctorates in philosophy, civil and Canon law, he was ordained a priest and entered the Order of Friars Minor Capuchins, taking “Fidelis” as his religious name. He quickly gained a reputation of holiness for his penance, vigils and prayer.

+ Dedicated to preaching, he was commissioned by the Sacred Congregation for the Propagation of the Faith to preach to the people of the canton of the Grisons, who had recently converted to Protestantism.

+ On April 24, 1622, Fidelis was preaching a sermon on the text, “There is One Lord, one Faith, one Baptism,” when an attempt was made on his life. Refusing to flee the church or seek refuge, he was later attacked by twenty armed men who beat him to death.

+ Saint Fidelis was canonized in 1746 and his feast was extended to the Universal Church in 1771. He is honored as one of the patrons of lawyers.

“[Saint Fidelis] practiced the fullness of charity in bringing consolation and relief to his neighbors as well as to strangers. With a father’s love he embraced all those who were in trouble.”—Pope Benedict XIV

On this day, we also remember Saint Mary Salome, the wife of Zebedee and the mother of the apostles John and James. One of the “three Marys” who traveled with Jesus during his ministry and who witnessed his death on the cross. Saint Mark mentions that she was one of the women who came to anoint the body of Jesus on that first Easter morning.

O God, who were pleased to award
the palm of martyrdom to Saint Fidelis
as, burning with love for you, he propagated the faith,
grant, we pray, through his intercession,
that, grounded in charity,
we may merit to know with him
the power of the Resurrection of Christ.
Who lives and reigns with you in the unity of the Holy Spirit,
one God, for ever and ever. Amen.