Friday, April 3
Saint of the Day: St. Joseph the Hymnographer

Defender of Icons and Composer of Hymns 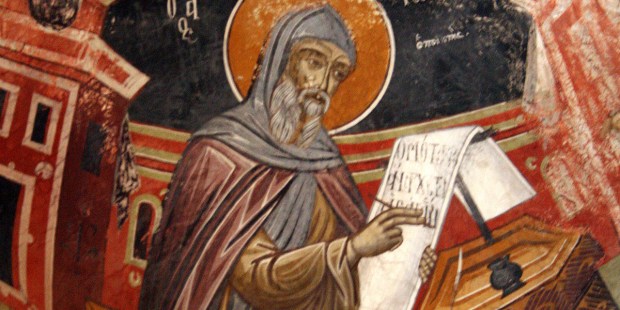 + Joseph was born to a Christian family in Sicily. As a young man, he was forced to flee his homeland because of invading armies and he traveled to Thessalonica, where he became a monk.

+ Sometime later, Joseph moved to Constantinople and became a monk in the monastery known as the “Studium.” He was again forced to flee, this time because of the iconoclast persecutions, when certain Christians rejected the use of sacred images and often violently persecuted those Christians who continued to use them.

+ As he was making his way to Rome, Joseph was captured by pirates and spent several years serving as a slave in Crete. During that time, he ministered to his fellow slaves and converted some to Christianity.

+ After being freed, Joseph returned to Constantinople and actively opposed the iconoclasts. Because of his opposition, he was exiled from Constantinople.

+ Before his death, Joseph was named bishop of Salonica. He is most remembered as a liturgical poet and hymn writer and he is credited with composting more than 1,000 liturgical texts.

+ Saint Joseph “the Hymnographer,” the “sweet-voiced nightingale of the Church,” died in 886.

“Sing to the Lord a new song;

sing to the Lord, all the earth.

Sing to the Lord, bless his name;

proclaim his salvation day after day.”—Psalm 96:1-2

Almighty and eternal God, who gave your holy Church blessed Joseph as Bishop, grant that what he taught when moved by the divine Spirit may always stay firm in our hearts; and as by your gift we embrace him as our patron, may we also have him as our defender to entreat your mercy. Through our Lord Jesus Christ, your Son, who lives and reigns with you in the unity of the Holy Spirit, one God, for ever and ever. Amen.

(from The Roman Missal: Common of Pastors—For a Bishop)