Mother of the Emperor Constantine 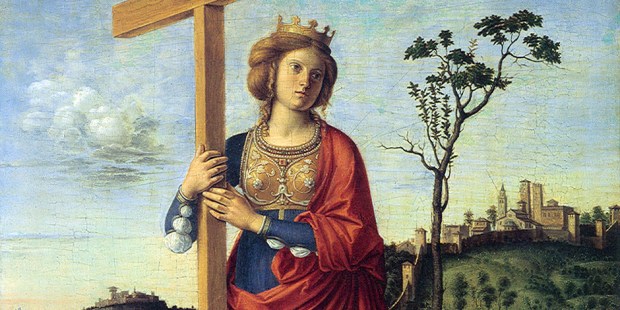 + According to some traditions, Helen was born in England around 250.

+ The mother of the man who would become Emperor Constantine “the Great,” she became a Christian in 312, when she was already more than 60 years old.

+ Known for her simplicity and concern for the poor, she endowed many churches.

+ Helen is best known for her pilgrimages to the Holy Land where she devoted herself to building churches on the Mount of Olives, in Bethlehem, and other holy sites. She is especially honored for recovering the relics of the Holy Cross and other relics associated with the lives of Jesus and Mary.

+ Saint Helen died around 328 and was buried in the Church of Ss. Marcellinus and Peter in Rome. She is especially honored in the Eastern Church where she shares a feast with her son Constantine (who is also honored as a saint) on May 21.

According to ancient tradition, the relics of the Passion of Jesus that Saint Helen brought back to Rome are enshrined in the Basilica of Santa Croce in Gerusalemme. At the time of its construction, the floor of the basilica was covered with soil from Jerusalem and so the church itself is considered “in Jerusalem” because of the soil.

“Behold a wise woman who has built her house. She feared the Lord and walked in the right path.”—Proverbs 14:1-2

O God, who gladden us each year with the feast day of blessed Helen, grant, we pray, that we, who are called to honor her, may also follow her example of holy living. Through our Lord Jesus Christ, your Son, who lives and reigns with you in the unity of the Holy Spirit, one God, for ever and ever. Amen.

(from The Roman Missal: Common of Holy Men and Women—For a Holy Woman)