Friday, June 5
Saint of the Day: St. Boniface of Mainz 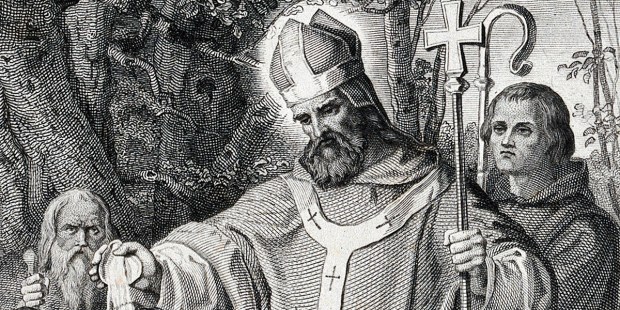 + Boniface (whose baptismal name was Winfrid) was born in Devonshire, England. Educated by the Benedictines, he later lived as a monk in the abbeys of Exeter and Nursling.

+ With the blessing of his abbot, Boniface traveled to Friesland in 716, but his missionary efforts were unsuccessful. After returning to England, he was elected abbot of Nursling. Boniface resigned a short time later and traveled to Rome to seek the pope’s permission to evangelize the people of Germany.

+ In 745, Boniface established a number of monasteries throughout Germany. Going out from these mission centers, founded several dioceses and he was later named bishop of Mainz.

+ After serving the people of Germany for more than 20 years, Boniface was martyred on June 5, 755. Today, Saint Boniface is honored as a patron of Germany.

“Let us stand fast in what is right and prepare our souls for trial. Let us wait upon God's strengthening aid and say to him: O Lord, you have been our refuge in all generations.”—From a “Letter on the Martyrdom of Saint Boniface” quoted in the Liturgy of the Hours

May the Martyr Saint Boniface be our advocate, O Lord,
that we may firmly hold the faith
he taught with his lips and sealed in his blood
and confidently profess it by our deeds.
Through our Lord Jesus Christ, your Son,
who lives and reigns with you in the unity of the Holy Spirit,
one God, for ever and ever. Amen.