Friday, May 22
Saint of the Day: St. Rita of Cascia

Patron Saint of the Impossible 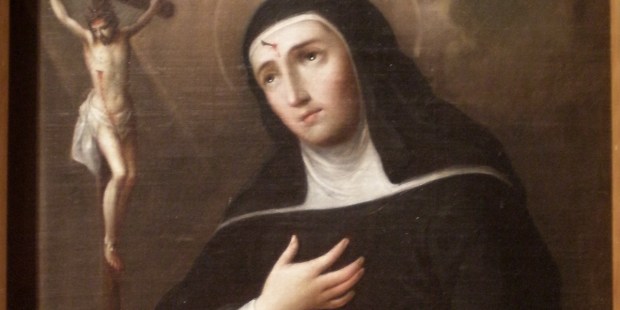 + Rita was born into a peasant family in Roccaporena, Italy. Although she wanted to be a nun, her parents arranged a marriage for her with a man who proved to be violent and adulterous.

+ After 18 years in a miserable marriage, her husband was murdered and her two sons died soon after. Rita was then free to fulfill her dream of a religious vocation and, in 1413, she entered the Augustinian monastery of Santa Maria Maddalena in Cascia.

+ Rita was graced to share in the Passion of Jesus—which was often the theme of her meditation and prayer—when she received a wound in her forehead, which seemed to have been made by a crown of thorns.

+ Within her community, Rita was known for her spirit of obedience and her love of penance, as well as for her care of the sick nuns and the concern she showed for visitors to the monastery.

+ Saint Rita died on May 22, 1457, and was canonized in 1900. Today, Saint Rita is honored as the patron of impossible cases and her incorrupt remains are enshrined in a basilica dedicated in her honor in Cascia.

According to ancient tradition, roses are often blessed on the feast of Saint Rita, recalling a legend that she asked for roses and figs as she was dying. Both were found by the nuns despite the fact that it was not the right season for either. To learn more about this tradition, click here.

“In seeking God, we quickly realize that no one is self-sufficient. Rather, we are called, in the light of faith, to move beyond self-centeredness, drawn by God’s Holy Face and by the ‘sacred ground of the other,’ to an ever more profound experience of communion.”—Pope Francis

The Sisters of St. Rita: www.sistersofstrita.org

Bestow on us, we pray, O Lord,
the wisdom and strength of the Cross,
with which you were pleased to endow Saint Rita,
so that, suffering in every tribulation with Christ,
we may participate ever more deeply in his Paschal Mystery.
Who lives and reigns with you in the unity of the Holy Spirit,
one God, for ever and ever. Amen.