Patron saint of domestic workers and friend of the poor 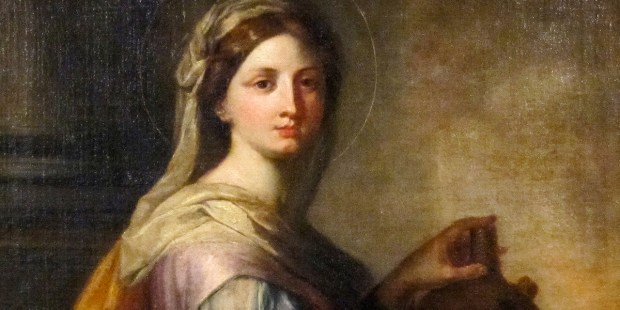 + Zita was born near Lucca, Italy.

+ At the age of twelve she began to work as the servant of a wealthy family. She remained in their service for the rest of her life.

+ Zita was initially disliked by the other servants because of her piety and humility but she late won their respect through her sincerity, warmth, and hard work.

+ Zita was especially loved by the poor in the region and she is especially remembered for her kindness and charity.

+ Saint Zita died on April 27, 1278. She was canonized in 1748 and was declared the patron saint of domestic workers in 1935. Her shrine in Lucca’s Basilica of San Frediano is a popular place of pilgrimage.

“Amen, I say to you, whatever you did for these least brothers of mine, you did for me.”—Matthew 25:40

A legend from the life of Saint Zita relates that one day, when she was supposed to be baking bread for the family, a poor person came to the house asking for food. While Zita was serving the poor person, another servant who disliked Zita’s piety told the family that Zita was neglecting her duties. Going to the kitchen, hoping to surprise Zita when she returned, the servant was surprised to see angels baking the break while Zita was away. This legend gave rise to the tradition of baking special loves of “St. Zita’s Bread” each year on her commemoration.

Hear us, God our Savior, that, as we rejoice in commemorating the Virgin blessed Zita, we may be instructed by her loving devotion. Through our Lord Jesus Christ, your Son, who lives and reigns with you in the unity of the Holy Spirit, one God, for ever and ever. Amen.

(from The Roman Missal: Common of Virgins)