Monday, February 17
The Seven Founders of the Servite Order

Devoted to the Blessed Virgin Mary 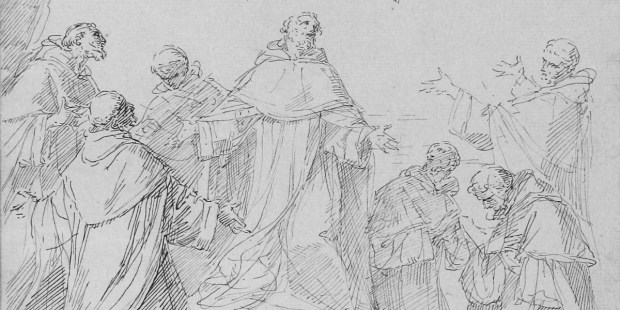 + On this day, the church celebrates the memory of seven noblemen from Florence, Italy, who came together to create a new religious order dedicated to the Sorrows of the Blessed Virgin Mary.

+ The seven holy founders are:

+ Known as the “Order of Servants of Mary,” these seven founders established their first community outside of Florence in 1240. Following the Rule of St. Augustine and wearing a black habit that was, according to tradition, given to them by Mary herself, the Servites dedicated themselves to lives of contemplation combined with service to the poor.

+ A “second order” of cloistered nuns was affiliated with the Servite Order in 1619. Saint Juliana Falconieri, the niece of one of the seven founders, established a “third order,” the Mantellate, around the year 1284.

+ The Seven Holy Founders of the Servite Order were canonized in 1887.

“There were seven men worthy of all our praise and veneration, whom our Lady brought into one community to form this order of hers and of her servants. They were like seven stars joined together to form a constellation.”—From an early account of the founding of the Servite Order by an anonymous writer

On this day we also remember Blessed Antoni Leszczewicz. This Lithuanian-born priest was a member of the Marians of the Immaculate Conception and was martyred in Rosica, Belarus, on February 17, 1943. Another Marian priest serving in Rosica, Blessed George (Jerzy) Kaszyra, also suffered martyrdom the following day. These two priests were beatified with other Martyrs of World War II in 1999.

To learn about the ancient and modern communities of Servites, visit the links below:

The Sisters of the Order of Servants of Mary of London/Cuves, visit: http://www.osms.org/who_we_are/

Impart to us, O Lord, in kindness
the filial devotion with which the holy brothers
venerated so devoutly the Mother of God
and led your people to yourself.
Through our Lord Jesus Christ, your Son,
who lives and reigns with you in the unity of the Holy Spirit,
one God, for ever and ever. Amen.