Monday, January 13
Saint of the Day: Saint Hilary of Poitiers

“Doctor of the Divinity of Christ” 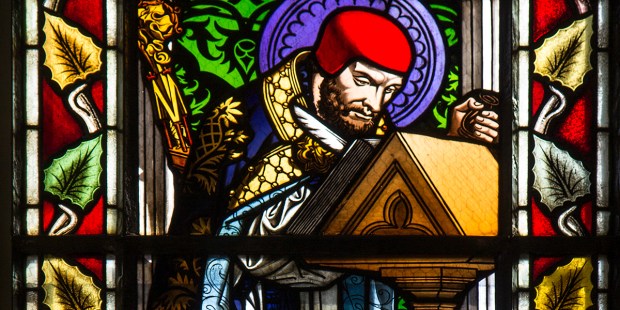 + Hilary was born into a noble family in Poitiers, France. Although he was raised as a pagan his philosophical inquiries and study of Sacred Scripture led him to the Christian Faith.

+ Appointed bishop of Poitiers in 353, Hilary spent considerable time and energy combating the Arian heresy, which denied the Divinity of Jesus. While a very mild-mannered and agreeable person, he did not hesitate to use severe language in proving the Emperor Constantius for his support of Arianism.

+ The outraged emperor exiled Hilary as punishment for his criticism. Hilary spent those years in exile writing in defense of the Faith and he became one of more influential churchmen of his day.

+ Saint Hilary eventually returned to Poitiers and died there around 368. He has traditionally been invoked for protection against snakebites and was proclaimed a Doctor of the Church in 1851.

“Through the prophets and apostles we know about you, the one God the Father, and the one Lord Jesus Christ. May we have the grace, the face of heretics who deny you, to honor you as God, who is not alone, and to proclaim this as truth.”—Saint Hilary of Poitiers

O Lord our God, you raised up your servant Hilary to be a champion of the catholic faith: Keep us steadfast in that true faith which we professed at our baptism, that we may rejoice in having you for our Father, and may abide in your Son, in the fellowship of the Holy Spirit; who live and reign for ever and ever. Amen.