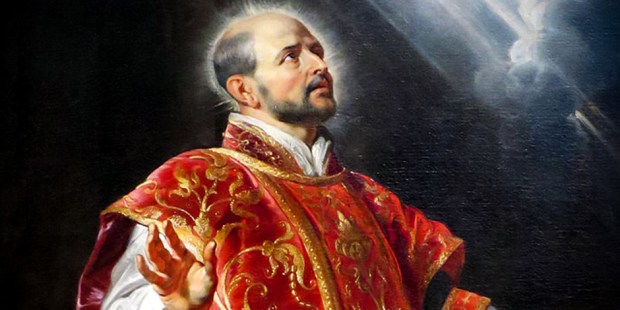 + Born in Spain, Ignatius became a soldier in the army of Navarre, but his military career was cut short when he was wounded in the siege of Pamplona.

+ During his day so recovery, he began reading the lives of the saints and a life of Christ. After making a pilgrimage to the famed Benedictine Abbey of Montserrat, he resolved to follow Christ.

+ With six companions Ignatius pronounced religious vows in 1534, establishing the Society of Jesus. The community was officially approved in 1540.

+ Saint Ignatius is especially honored for his contribution to contemplative prayer through his Spiritual Exercises and unique method of meditation.

+ Saint Ignatius Loyola died in 1556 and was canonized in 1622 in the same ceremony as Saint Teresa of Avila, Saint Francis Xavier, and Saint Isidore the Farmer.

In 2013, Pope Francis, himself a Jesuit, canonized Saint Peter Faber, one of the original companions of Saint Ignatius Loyola and Saint Francis Xavier. Faber traveled across Europe as a missionary and is credited as an important figure in the Catholic Counter-Reformation. The Church celebrates his memory on August 1.

“Do not let any occasion of gaining merit pass without taking care to draw some spiritual profit from it.”—Saint Ignatius Loyola

O God, who raised up Saint Ignatius of Loyola in your Church
to further the greater glory of your name,
grant that by his help we may imitate him
in fighting the good fight on earth
and merit to receive with him a crown in heaven.
Through our Lord Jesus Christ, your Son,
who lives and reigns with you in the unity of the Holy Spirit,
one God, for ever and ever. Amen.