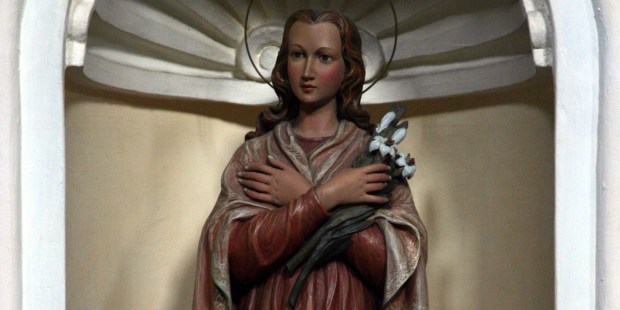 + Maria was born in the region of Ancona, Italy. After her father’s death, Maria assisted her hard-working mother by taking care of her five younger brothers and sisters.

+ Maria’s family shared a house with the Serenlli family, including their son, Alessandro, whom Maria honored as an elder brother.

+ In June, 1902, Alessandro twice made sexual advances towards Maria, threatening to kill her if she told anyone.

+ On July 5, he entered the Goretti home armed with a dagger. When Maria refused to submit to his advances, he stabbed her fourteen times.

+ Maria died on July 6, 1902, after having forgiven Alessandro; she was eleven years old. Pope Pius XII canonized Maria in 1950 in the presence of her mother and other members of her family.

+ Following his release from prison, Alessandro sought forgiveness from Maria’s mother, which she gladly offered. The next day they knelt together to receive communion side by side. Alessandro was also a witness in the process of Maria’s canonization and spent the remainder of his life as a claustral oblate with the Capuchin Franciscans. He died in 1970.

“Not all of us are expected to die a martyr's death, but we are all called to the pursuit of Christian virtue. This demands strength of character though it may not match that of this innocent girl. Still, a constant, persistent and relentless effort is asked of us right up to the moment of our death. This may be conceived as a slow steady martyrdom which Christ urged upon us when he said: The kingdom of heaven is set upon and laid waste by violent forces.”—Pope Pius XII at the canonization of Saint Maria Goretti

O God, author of innocence and lover of chastity,
who bestowed the grace of martyrdom
on your handmaid, the Virgin Saint Maria Goretti, in her youth,
grant, we pray, through her intercession,
that, as you gave her a crown for her steadfastness,
so we, too, may be firm
in obeying your commandments.
Through our Lord Jesus Christ, your Son,
who lives and reigns with you in the unity of the Holy Spirit,
one God, for ever and ever. Amen.