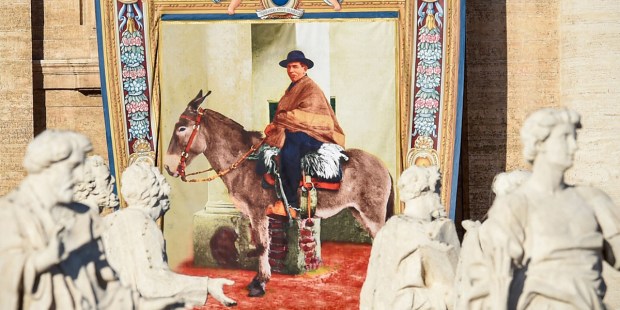 + Jose Gabriel was born in Santa Rosa de Río Primero, Argentina. He began to study for the priesthood when he was 16 years old and was ordained in 1866. That same year, he became a member of the Dominican Third Order.

+ After serving as prefect of studies at the diocesan seminary, he began to work for with the civil government to bring post offices, telegraph offices, and a rail network to rural areas. He also began to give himself tirelessly to the care of the poor.

+ He earned a reputation for traveling long distances by mule, dressed in a sombrero and poncho and became known as the “Gaucho Priest.”

+ In 1867, he cared for the sick during a cholera epidemic and later contracted leprosy. Despite his own health concerns, he was tireless in efforts to improve the lives of his parishioners.

“He knew the love of Jesus. He let his heart be touched by the mercy of God.”—Pope Francis, speaking of the canonization of Saint Jose Gabriel del Rosario Brochero

On March 16, we also remember Saint Abban. A contemporary of Saint Patrick, he founded the abbey of Kill-Abban in Leinster, Ireland, and served as the community’s first abbot. Saint Abban died in the fifth century.

We humbly ask you, almighty God,

that at the intercession of blessed Jose Gabriel
you may multiply your gifts among us
and order our days in peace.
Through our Lord Jesus Christ, your Son,
who lives and reigns with you in the unity of the Holy Spirit,
one God, for ever and ever. Amen.