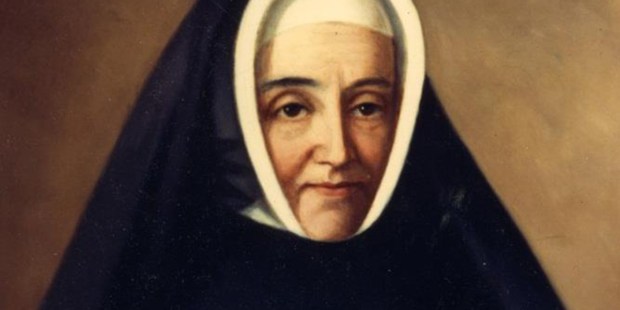 + Esther Blondin was born into a pious French-Canadian family in Terrebonne, Quebec. Like her family members and most members of the local community, she was illiterate into adulthood.

+ While serving as a domestic servant for the Sisters of Notre Dame, she felt called to religious life and entered that community, but was forced to leave because of ill health. It was during this period of her life that she learned to read.

+ Esther became a parochial schools teacher in Vaudreuil, Quebec, and was later named director of the school. She recognized the disastrous effects illiteracy and also the inequality faced by girls and women, who could only be taught by other women, with boys being taught only by men. Most parishes could not afford a parish school.

+ In 1848, she sought permission to form a religious community that would teach boys and girls in the same school. This was a radical idea, but she received permission from the government and the local bishop. The new community—the Sisters of St. Anne—was established on September 8, 1850, and Esther served as first superior, taking the religious name Maria Anna.

+ The community grew quickly, but the sisters’ chaplain, Father Marechal, abused his position, meddled in the finances and administration of the community, and succeeded in undermining Mother Maria Anna’s authority as superior and foundress.

+ Accused of financial mismanagement, Maria Anna was forbidden to hold any administrative position in the community for the final 32 years of her life and the sisters were order not to refer to her as “Mother.” Accepting this with humility and courage, Maria Anna served in the laundry and in doing other simple, meaningful work for the sisters.

+ The sisters tried to elect her superior several times, but each time she was forbidden to accept and, in obedience, she never tried. Despite these humiliations, she had the consolation of seeing the congregation prosper and her efforts for universal education became the norm.

“Model of a humble and hidden life, Marie-Anne Blondin found interior strength by contemplation the cross, showing us that the life of intimacy with Christ is the surest way to give fruits mysterious and fulfill the mission willed by God.”—Pope Saint John Paul II

To learn more about the Sisters of St. Anne, visit: https://www.sistersofsaintanne.org/

O God, who raised up blessed Maria Anna in your Church to show others the way of salvation, grant us, by her example, so to follow Christ the master, that we may come with our neighbor into your presence. Through our Lord Jesus Christ, your Son, who lives and reigns with you in the unity of the Holy Spirit, one God, for ever and ever. Amen.