Saturday, April 25
Saint of the Day: The Feast of Saint Mark

The author of the Gospel of Mark 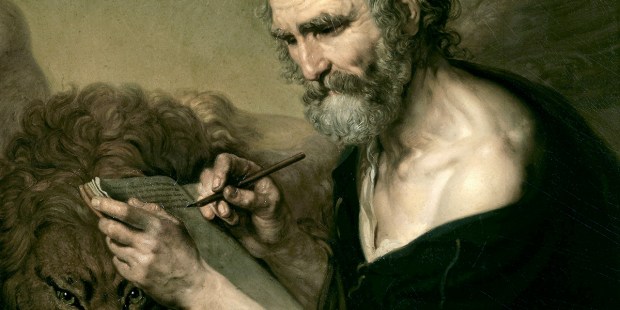 + According to ancient tradition, Mark was a disciple of Saint Peter and the author of the second Gospel.

+ According to the Acts of the Apostles, he accompanied Saint Paul on his mission to Cyprus (Acts 13:5) and he later joined Paul and Barnabas in Antioch (Acts 12:25).

+After a disagreement between Paul and Barnabas, we do not know what Mark did, although it seems that he and Saint Paul were later reconciled because Paul calls Mark his “collaborator” during his imprisonment in Rome (cf. Colossians 4:10 and 2 Timothy 4:11)

+ Later traditions tell us that Mark later traveled to Alexandria, Egypt, where he served as bishop and suffered martyrdom around the year 68.

+ In the ninth century the relics of Saint Mark were transferred to Venice, Italy, where they are still venerated. He is honored as a patron of lawyers and notaries and of dozens of cities in Italy and other parts of Europe.

Although Scripture scholars are in disagreement, certain traditions identify Mark the Evangelist with a man named John Mark (Acts 12:12; 15:37-40), who is said to have carried water to the house where the Last Supper took place (cf. Mark 14:13). Some traditions also say that Mark—as a young man—was present when Jesus was arrested in the Garden of Gethsemane (Mark 14:51052).

“The Church, spread throughout the whole world, received this preaching and this faith and now preserves it carefully, dwelling as it were in one house. Having one soul and one heart, the Church holds this faith, preaches and teaches it consistently as though by a single voice. For though there are different languages, there is but one tradition.”—Saint Irenaeus of Lyons

O God, who raised up Saint Mark, your Evangelist,
and endowed him with the grace to preach the Gospel,
grant, we pray,
that we may so profit from his teaching
as to follow faithfully in the footsteps of Christ.
Who lives and reigns with you in the unity of the Holy Spirit,
one God, for ever and ever. Amen.