Founder of the Order of Preachers 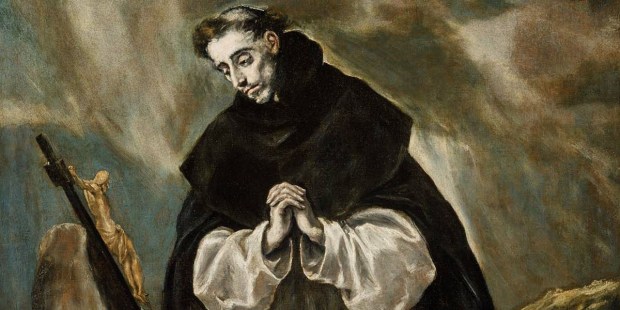 + Dominic de Guzmán was born in Calaruega, Spain. After studying the theology and the arts, he became an Augustinian Canon.

+ Dominic successfully worked to combat heresy in France and became a successful preacher.

+ In order to provide for the education of children, he founded a community of nuns in Prouille, which later became the motherhouse of all communities of contemplative Dominican nuns.

+ In 1214, Dominic gathered together men who could assist him in his mission of preaching. The rule for this new community—the Order of Preachers—was approved in 1216.

+ Dominic died in Bologna, Italy, in 1221, and at his canonization in 1234, Pope Gregory IX called him a “man of the Gospel in the footsteps of the Redeemer.”

+ Saint Dominic is honored as the patron of the Dominican Republic and of astronomers.

“Wherever he went he showed himself in word and deed to be a man of the gospel… He seldom spoke unless it was with God, that is, in prayer, or about God.”—from an early Life of Saint Dominic

On this day, the Church also celebrates Saint Mary MacKillop. In 1866, she established the Sisters of St. Joseph of the Sacred Heart, committing herself and her sisters to educating poor children in remote areas of Australia and beyond. Saint Mary died in 1909 and was canonized in 2010, becoming the first native-born Australian saint.

May Saint Dominic come to the help of your Church
by his merits and teaching, O Lord,
and may he, who was an outstanding preacher of your truth,
be a devoted intercessor on our behalf.
Through our Lord Jesus Christ, your Son,
who lives and reigns with you in the unity of the Holy Spirit,
one God, for ever and ever. Amen.