“Always see Jesus in every person.” 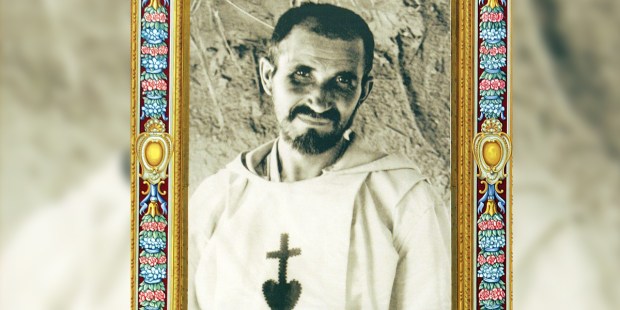 + Charles was born to wealthy family in Strasbourg, France. After a rocky military career, he made a name for himself working as a cartographer in Morocco.

+ Charles experiencing a profound conversion and became a Trappist monk, although he later left the monastery. After spending time in Rome and the Holy Land, he was ordained a priest in 1901.

+ The year after his ordination, Charles returned to Morocco, in order to live among the poor nomadic tribes he had come to know during his years as a cartographer. He believed that he was called to imitate the hidden life of Jesus in Nazareth and believed he could effectively spread the Gospel by simply living and witnessing to his faith.

+ Charles translated the gospels into the native language of the Tuareg people and worked on a lexicon he was never to complete. On December 1, 1916, he was killed by native insurrectionists.

+ Charles had dreamed of sharing his vocation with others. Although this dream went unfulfilled, he succeeded in laying the foundation for what became the “spiritual family of Charles de Foucauld,” a group which today includes religious communities and institutes for both laity and priests.

“Above all, always see Jesus in every person, and consequently treat each one not only as an equal and as a brother or sister, but also with great humility, respect and selfless generosity.”—Blessed Charles de Foucauld

who have taught your Church to keep all the heavenly commandments

by love of you as God and love of neighbor;

grant that, practicing the works of charity

after the example of blessed Charles

we may be worthy to be numbered among the blessed in your Kingdom.

(Prayer from The Roman Missal: Common of Holy Men and Women—For Those Who Practiced Works of Mercy)