Friend and Collaborator of Saint Paul 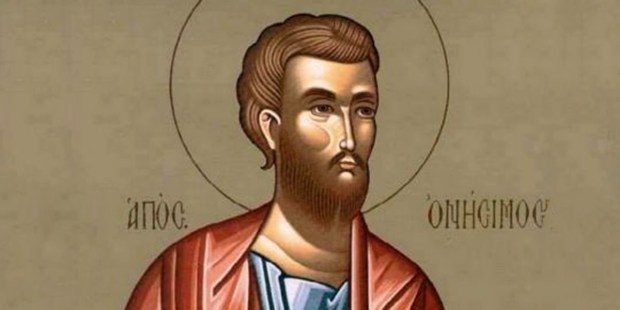 + Onesimus is mentioned in Saint Paul’s Letter to Philemon.

+ A slave from Colossae, he managed to join the Apostle Paul while he was in prison.

+ After Onesimus accepted the Christian faith, Paul sent him back to Philemon and the letter Paul wrote urges Philemon to receive his former slave as a brother.

+ Later traditions tell us that Onesimus served bishop of Ephesus and that he was martyred around the year 68.

“I appeal to you for my child, Onesimus, whose father I have become in my imprisonment. (Formerly he was useless to you, but now he is indeed useful to you and to me.) I am sending him back to you, sending my very heart.”—Philemon 10-12

On this day we also remember Saint Joseph of Antioch. A deacon and composer of sacred hymns, he was one of a number of Christians martyred for their defense of sacred images during the 9th century iconoclast controversy.

O God, who in your Saints have given an example and brought us protection in our weakness to help us tread the path of salvation, mercifully grant that we, who honor the heavenly birthday of blessed Onesimus, may, through his example, make our way to you. Through our Lord Jesus Christ, your Son, who lives and reigns with you in the unity of the Holy Spirit, one God, for ever and ever. Amen.