Saturday, July 11
Saint of the Day: St. Benedict of Nursia 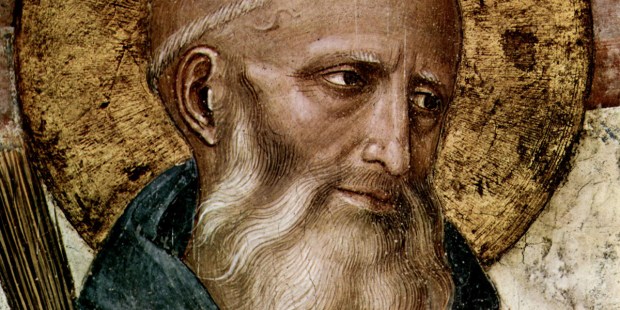 + Benedict and his twin sister, Scholastica, were born in Nursia (Norcia), Italy. As a young man, Benedict rejected the excess and immorality he saw while studying in Rome.

+ He lived as a hermit in a cave at Subiaco but soon attracted other men seeking to join him in his way of life. He eventually gathered these men into twelve monasteries, the most important of which was Monte Cassino.

+ It was a Monte Cassino that Benedict wrote (or at least finalized) his “Rule for Monks,” a vision of monastic life and spirituality that drew on the writings of Saint Basil the Great, Saint John Cassian, the Desert Fathers, and the older “Rule of the Master.”

+ Saint Benedict died around the year 550 and was buried in the same grave as his sister, who had died shortly before her brother.

+ During the reign of the Emperor Charlemagne, the Rule of Benedict became the standard rule for monasteries in Western Europe.

What we know of Saint Benedict’s life comes from the second Book of the Dialogues of Pope Saint Gregory the Great. Although he never became a priest, Benedict was a highly regarded spiritual leader and this account his life is filled with wonderful stories and miracles that show Benedict’s holiness and the great respect that Gregory and other Church leaders had for him.

“Prefer nothing whatever to Christ. And may He bring us all alike to everlasting life.”—Saint Benedict

To see a list of the communities of Benedictine monks and nuns and sisters in the United States, visit: https://www.osb.org/becoming-a-monk-or-nun/

O God, who made the Abbot Saint Benedict
an outstanding master in the school of divine service,
grant, we pray,
that, putting nothing before love of you,
we may hasten with a loving heart
in the way of your commands.
Through our Lord Jesus Christ, your Son,
who lives and reigns with you in the unity of the Holy Spirit,
one God, for ever and ever. Amen.