Patron Saint of the Sick 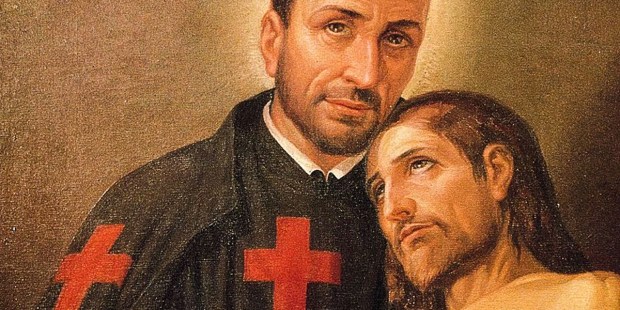 + Camillus was born in the Abruzzi region of Italy and was a successful soldier.

+ A giant of a man (he was 6’6” tall), Camillus also had a quick temper. A gambling addiction left him all but destitute and he developed a painful ulcer on his right leg which never healed and caused him pain for the rest of his life.

+ When he was at his lowest point, he met a Capuchin Franciscan friar who helped Camillus turn his life around. Camillus eventually decided to dedicate his life to serving Christ in the sick-poor.

+ After being ordained a priest, Camillus gathered together a group of disciples, forming a new religious community—the Order of Servants of the Sick (the “Camillians”). Camillus was known for his charity toward the sick, but also as a gifted nurse who demanded cleanliness and technical knowledge from the members of his community.

+ Camillus ordered the members of his order to wear a red cross on their habit as a reminder that their only motivation should be to follow Christ by spending their lives in service of the sick. There is no connection between the distinctive red cross worn by the Camillians and the symbol later adopted as the official emblem of the American Red Cross.

+ Saint Camillus de Lellis died in 1614 and was canonized in 1746. He is honored a patron saint of nurses and of all who serve the sick.

“Great and all-embracing was Camillus’ charity. Not only the sick and dying, but every other needy or suffering human being found shelter in his deep and kind concern.”—From a contemporary account of the life of Saint Camillus

To learn more about the work of the Camillian Fathers and Brothers, visit: http://www.camillians.org/

O God, who adorned the Priest Saint Camillus
with a singular grace of charity towards the sick,
pour out upon us, by his merits,
a spirit of love for you,
so that, serving you in our neighbor,
we may, at the hour of our death,
pass safely over to you.
Through our Lord Jesus Christ, your Son,
who lives and reigns with you in the unity of the Holy Spirit,
one God, for ever and ever. Amen.