Founder of the Norbertines 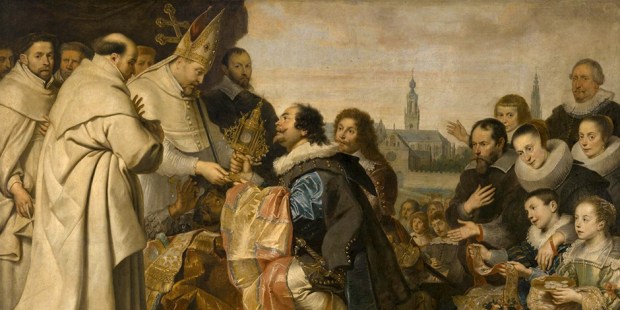 + Norbert was born to a noble family near Cologne, Germany. As a young man he served as the emperor’s almoner, although he was technically a cleric.

+ A worldly pleasure-seeker in his early life, Norbert experienced a profound conversion and was ordained a priest in 1115. A short time later, he settled in the valley of Premontre in northern France. Within a few months, he was joined by other men and, on Christmas Day, 1121, the group made religious vows, forming a new religious order: The Canons Regular of Premontre (commonly known as the Norbertines).

+ Norbert’s new order brought together the monks’ love of the liturgy and the diocesan clergy’s commitment to pastoral ministry. Norbertines continue this way of life throughout the world today.

+ In 1126, Norbert was appointed archbishop of Magdeburg. As bishop, he continued to live as a religious and he worked for reform of the clergy and for the unity of the Church. He was known for his great love of the Eucharist and is often shown carrying a monstrance or ciborium.

“Affable and charming, amiable to one and all, ‘he was at ease in the company of the humble and the great alike.’ Finally, he was a most eloquent preacher; after long meditation ‘he would preach the word of God’ and with his fiery eloquence purged vices, refined virtues and filled souls of good will with the warmth of wisdom.”—From an early life of Saint Norbert quoted in the Liturgy of the Hours

On this day, the Church also honors the memory of Saint Marcelin Champagnat. A fellow student of Saint John Vianney, he established the Little Brothers of Mary (the Marist Brothers) "to make Jesus Christ known and loved through the education of young people, especially those most neglected.” Saint Marcelin died on June 6, 1840, and was canonized in 1999.

To learn more about the Norbertine communities of men in the United States:

-Priory of St. Moses the Black in Raymond, Mississippi: www.stmosestheblackpriory.org

To learn more about the Norbertine community of women in the United States:

O God, who made the Bishop Saint Norbert a servant of your Church outstanding in his prayer and pastoral zeal, grant, we ask, that by the help of his intercession, the flock of the faithful may always find shepherds after your own heart and be fed in the pastures of salvation. Through our Lord Jesus Christ, your Son, who lives and reigns with you in the unity of the Holy Spirit, one God, for ever and ever. Amen.