Saturday, May 16
Saint of the Day: St. Brendan “the Navigator”

One of the Twelve Apostles of Ireland 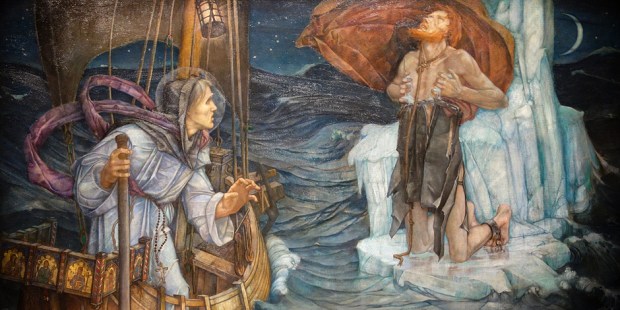 + Brendan was born near Tralee, Ireland, and educated by Erc, the Bishop of Kerry.

+ After becoming a monk, Brendan established new monasteries in Clonfert, Annadown, Inishadround, and Ardfert. He is also said to have founded abbeys in Scotland and Wales.

+ Saint Brendan died at the abbey of Clonfert in 575 and he became one of the most popular Celtic saints. He is honored as one of the saints known as the “Twelve Apostles of Ireland.”

+ Devotion to Saint Brendan became widespread after the publication of a fantastic tale called The Navigation of Saint Brendan, which tells of a sea voyage Brendan undertook with a group of his monks to an island across the Atlantic Ocean called “the Land of Promise of the Saints.”

+ Some of the details of The Navigation of Saint Brendan may be based in fact, as it seems that Irish monks did travel to the Faro Islands and to Iceland.

“The just will flourish like the palm tree, and grow like a Lebanon cedar, planted in the house of the Lord, in the courts of the house of our God.”—Psalm 92:13-14

Today we also remember the martyr Blessed Vladimir Ghika. A Romanian prince, Vladimir established the first free hospital and ambulance service in Romania. He was ordained a priest in Paris, France, in 1923, and returned to archdiocese of Bucharest, serving as a parish priest and caring for refugees during the Second World War. Arrested by the Communists in 1952 for the crime of being a Christian, he died on May 16, 1954, from the abuse and privations he suffered during his imprisonment. Blessed Vladimir was beatified in 2013.

Grant us, O Lord, that amid the uncertainties of this world we may cling with all our heart to the things of heaven, for through the Abbot blessed N. you have given us a model of evangelical perfection. Through our Lord Jesus Christ, your Son, who lives and reigns with you in the unity of the Holy Spirit, one God, for ever and ever. Amen.