Saturday, May 30
Saint of the Day: St. Joan of Arc

The Maid of Orleans 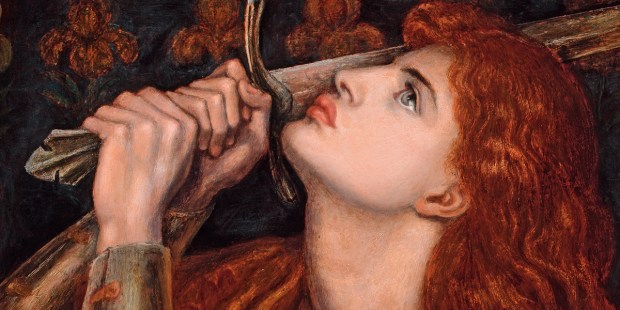 + Joan was born to a peasant in the village of Domremy, France. A pious child, she and her people suffered from the ravages of the Hundred Years War, with large sections of France being subject to English rule.

+ As a youth, she claims to have experienced a series of visions of Saint Michael the Archangel, Saint Catherine of Alexandria, and Saint Margaret of Antioch. These mystical experiences inspired her to offer her life for the liberation of France.

+ With the support of the future King Charles VII, Joan successfully raise the siege of Orleans and led Charles to his coronation in Rheims.

+ Joan was eventually betrayed and taken prisoner by the English. Condemned as a heretic by a Church court sympathetic to the English and abandoned by her king, she was burned at the stake in Rouen on May 30, 1431. She died looking at a crucifix and calling on the name of Jesus.

+ At the request of her family, Pope Callistus III later convoked a commission which declared her innocence. Honored as a patron saint of France and of soldiers, she was canonized in 1920.

“I would rather die than do something which I know to be a sin, or to be against God’s will.”—Saint Joan of Arc

In 1896, Mark Twain published an account of the life of Saint Joan entitled Personal Reflections of Joan of Arc by Sieur Louis de Conte. Twain later said, “I like Joan of Arc best of all my books; and it is the best; I know it perfectly well. And besides, it furnished me seven times the pleasure afforded me by any of the others; twelve years of preparation, and two years of writing. The others needed no preparation and got none.”

Holy God, whose power is made perfect in weakness: we honor you for the calling of Joan of Arc, who, though young, rose up in valor to bear your standard for her country, and endured with grace and fortitude both victory and defeat; and we pray that we, like Jeanne, may bear witness to the truth that is in us to friends and enemies alike, and, encouraged by the companionship of your saints, give ourselves bravely to the struggle for justice in our time; through Christ our Savior, who with you and the Holy Spirit lives and reigns, one God, now and for ever. Amen.