Celebrated for the Miracle of the Liquification of His Blood 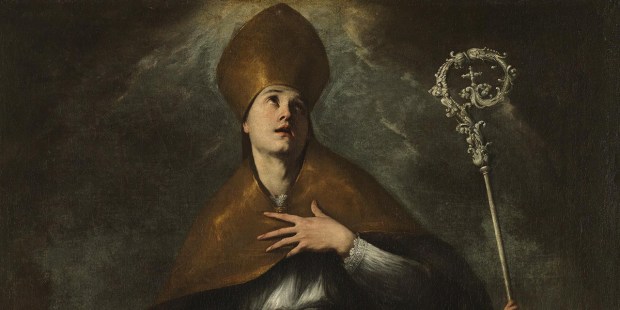 + Although we know little of the life of this early bishop of Naples, it is recorded that he died in the early Fourth Century.

+ According to tradition, Saint Januarius (San Gennaro) was born into a noble family and became the priest of the Christian community in Benevento, Italy. He was later elected bishop of Naples.

+ During the persecution of Christians by the Emperor Diocletian, Januarius helped hide his fellow Christians, protecting them from persecution.

+ Januarius was arrested as a leader of the Church and condemned to death. He was martyred around the year 305.

+ This saint is best known because of the miraculous liquification of the vials of his blood kept in the cathedral of Naples. Since the 17th century, it has been recorded that the blood of Saint Januarius has liquified on certain feasts of the Church year and during visits of the Holy Father. Although scientists have sought explanations of the miracle, the liquification of the blood of Saint Januarius remains unexplained. This holy bishop and martyr is honored as the patron saint of those honored with diseases of the blood.

“Blessed is the man who perseveres in temptation, for when he has been proved he will receive the crown of life that he promised to those who love him.”—James 1:12

On this day we also remember the apparition of the Blessed Mother to two shepherd children nearly La Salette, France, in 1851. In the apparition, Christians were asked to focus on conversion and to focus on prayer and reparation to appease divine justice. Ultimately, the message of the apparition is a “message of hope, for our hope is nourished by the intercession of her who is the Mother of humankind.” The apparitions of Our Lady at La Salette were approved by Blessed Pope Pius IX in in 1851. Since 1852, the priests and brothers of the Missionaries of Our Lady of La Salette have promoted the message of reconciliation and forgiveness promoted by the Blessed Mother in this miraculous encounter.

O God, who grant us to venerate
the memory of the Martyr Saint Januarius,
give us, we pray, the joy of his company
in blessed happiness for all eternity.
Through our Lord Jesus Christ, your Son,
who lives and reigns with you in the unity of the Holy Spirit,
one God, for ever and ever. Amen.