You know and love him as "Padre Pio" 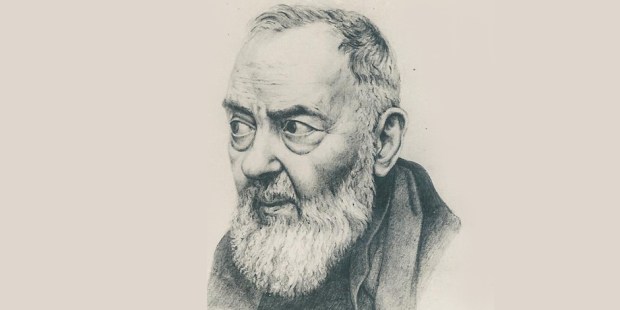 + The man who would come to be known throughout the world simple as “Padre Pio” entered the Capuchin Franciscans in 1903.

+ Shortly after his ordination in 1910, he began experiencing pains in his hands and feet. The following year, he admitted that he had “invisible stigmata for over a year.”

+ In 1918, Pio had the mystical experience of “transverberation” (being pierced by a lance), which left a wound in his side that bled continuously. A month later, the stigmata in his hands and feet became visible and remained so until his last Mass, celebrated on the day before he died.

+ Placed under close scrutiny by Church authorities, he was suspended from all priestly functions (apart from saying Mass privately) for two years.

+ People continuously flocked to the friar, seeking guidance and to make their confession. Pope Pius XII encouraged him to form prayer groups among the faithful. In 1940, Padre Pio helped establish a great hospital in San Giovanni Rotondo, not far from his friary.

+ Padre Pio died on September 23, 1968. He was canonized in 2002 at which time his memorial was added to the liturgical calendar.

In honor of the 130th anniversary of Saint Pio’s birth, relics of the saint are currently being carried throughout the United States for veneration by the faithful. To learn more, visit: http://www.saintpiofoundation.org/event/saint-padre-pio-comes-to-america-2/

“He wants you entirely for Himself, He wants you to place all your trust and all your affection in Him alone and it is precisely for this reason that He send you this spiritual aridity, to unite you more closely to Him.”—Saint Pio of Pietrelcina

Almighty ever-living God, who, by a singular grace,
gave the Priest Saint Pio a share in the Cross of your Son
and, by means of his ministry,
renewed the wonders of your mercy,
grant that through his intercession
we may be united constantly to the sufferings of Christ,
and so brought happily to the glory of the resurrection.
Through our Lord Jesus Christ, your Son,
who lives and reigns with you in the unity of the Holy Spirit,
one God, for ever and ever. Amen.