Sunday, August 9
Saint of the Day: St. Teresa Benedicta of the Cross

Philosopher and Victim of the Holocaust 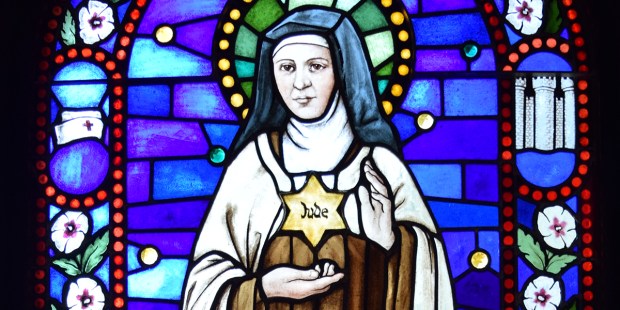 + Edith Stein was the eleventh child of a Jewish family from Wroclaw, Poland. As a teenager, she renounced her family’s faith and became an atheist.

+ A lifelong seeker of truth, she subjected every idea to fierce intellectual scrutiny and as a university student she studied psychology and philosophical phenomenology.

+ One of her professors introduced Edith to contemporary Catholic philosophy and this began the process of conversion that led to her baptism in 1922.

+ Inspired by the life of Saint Teresa of Avila, Edith eventually joined the Discalced Carmelites in Cologne, Germany, receiving the religious name “Teresa Benedicta of the Cross.”

+ As a person of Jewish ancestry, she was subject to the Nazis’ anti-Jewish policies and she fled to the Netherlands in order to protect the members of her community in Germany. It was there that she wrote her major work, The Science of the Cross.

+ In 1942, Sister Teresa Benedicta was arrested and deported to the concentration camp at Auschwitz where she was killed in the gas chambers on August 9.

+ Saint Teresa Benedicta of the Cross has been heralded as a model of virtue, self-denial, and heroism for both Jews and Christians and was canonized in 1998. Executed with Saint Teresa Benedicta was her sister, Rosa, who had also converted to Catholicism and who was living as an extern sister in the Carmel in Cologne.

“And when night comes, and you look back over the day and see how fragmentary everything has been, and how much you planned that has gone undone, and all the reasons you have to be embarrassed and ashamed: just take everything exactly as it is, put it in God’s hands and leave it with Him.”—Saint Teresa Benedicta of the Cross

God of our Fathers,
who brought the Martyr Saint Teresa Benedicta of the Cross
to know your crucified Son
and to imitate him even until death,
grant, through her intercession,
that the whole human race may acknowledge Christ as its Savior
and through him come to behold you for eternity.
Who lives and reigns with you in the unity of the Holy Spirit,
one God, for ever and ever. Amen.