Sunday, January 12
Today's Feast: The Feast of the Baptism of the Lord

“This is my beloved Son, with whom I am well pleased.” 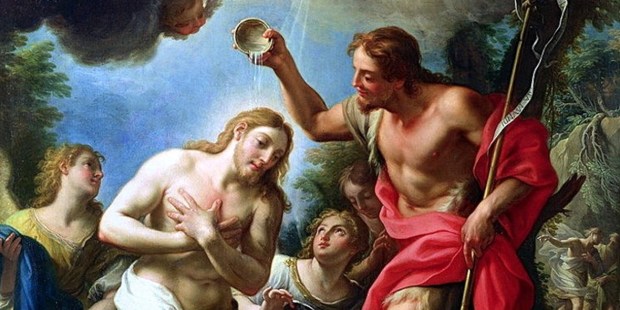 + The Baptism of the Lord forms part of the Mystery of the Epiphany, as we recall the revelation of Jesus as the Father’s beloved son at the moment of his baptism by John in the River Jordan.

+ The Fathers of the Church recognized the descent of the Holy Spirit upon Jesus as his anointing and appointment as the Messiah, marking the beginning of his public ministry (see also Acts 10:34-38).

+ In the preface of the Mass for this feast, we pray:

In the waters of the Jordan

you revealed with signs and wonders a new Baptism,

so that through the voice that came down from heaven

we might come to believe in your Word dwelling among us,

has been anointed with the oil of gladness

and sent to bring good news to the poor.

+ The Feast of the Baptism of the Lord marks the end of the Christmas season.

The voice of the LORD is over the waters,

On the twelfth of January, we also remember Saint Bernard of Corleone. A Capuchin lay brother, he was known for his simplicity and penance and for miraculous healings attributed to his prayers. Saint Bernard died in 1667 and was canonized in 2001.

O God, whose Only Begotten Son
has appeared in our very flesh,
grant, we pray, that we may be inwardly transformed
through him whom we recognize as outwardly like ourselves.
Who lives and reigns with you in the unity of the Holy Spirit,
one God, for ever and ever. Amen.