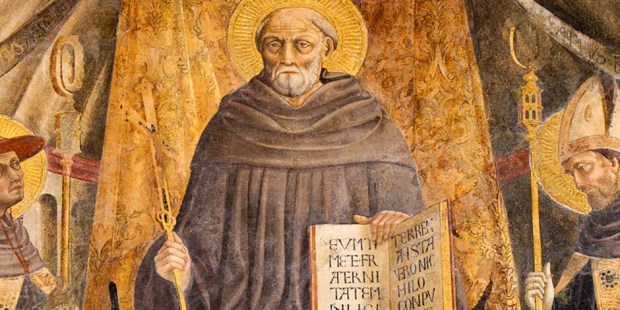 + John was born in Florence and received an excellent education in theology, the arts, and science. Little is known of his early life except the story that on one Good Friday he met the man who murdered his brother and just as he was about the take revenge, the man crossed his arms across his chest and begged for mercy “by the Passion of Christ.” John was so moved that he embraced and forgave the man.

+ John became a monk in the Benedictine abbey of San Miniato in Florence. Inspired by the life of Saint Romuald, John decided to build his own monastery, stressing poverty, silence, and strict enclosure. This monastery became the nucleus of a new monastic family: The Vallombrosian Bendictines.

+ John Gualbert died on July 12, 1073, and was canonized in 1193. Today the congregation he founded is part of the broader Benedictine Confederation.

+ The area around John’s monastery at Vallombrosa was a wild and deserted area when the monks arrived. According to tradition, John thought it would be good for his monks to take care of the grounds but, instead of planting traditional gardens, the monks planted trees, creating what would today be considered a park. For this reason, John Gualbert has come to be honored as the patron of foresters, park rangers, and parks.

“The just will flourish like the palm tree, and grow like a Lebanon cedar, planted in the house of the LORD, in the courts of the house of our God.”—Psalm 92:13-14

On this day, we also remember Saint Jason of Tarsus, a companion and collaborator of Saint Paul the Apostle mentioned in Acts 16 and Romans 17. According to later traditions, he is said to have been bishop of Tarsus and to have died as a martyr.

Almighty and ever-living God, source of true peace and lover of concord, to know you is true life, to serve you is perfect freedom. Establish us in our love for you that by the example of blessed John, your abbot, we may render good for evil and blessings instead of curses and so find in you pardon and peace. Through Jesus Christ our Lord. Amen.