Sunday, July 5
Saint of the Day: St. Elizabeth of Portugal

Patron of the Franciscan Third Order 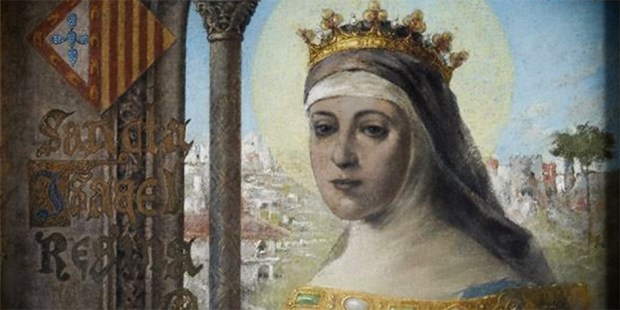 + Elizabeth was the daughter of the King of Aragon and was named after her great-aunt, Saint Elizabet of Hungary.

+ At the age of 12, Elizabeth was given in marriage to King Denis of Portugal and the couple had two children. The marriage was a sham, as Elizabeth patiently endured her husband’s infidelities, even going so far as to contribute to the education of his illegitimate children.

+ Elizabeth’s charitable works included opening a hospital, a home for homeless girls, an orphanage, and a monastery of Poor Clare nuns in Coimbra. It was in this community that Elizabeth sought entry after her husband’s death in 1325. Although she was denied the opportunity to become a professed sister, she did become a Franciscan Tertiary and lived in a house near the monastery following a schedule similar to that of the nuns.

+ Saint Elizabeth of Portugal died in 1336 and was declared a saint in 1625. With Saint Louis of France, she is honored as the patron saint of Franciscan Tertiaries.

Is this not, rather, the fasting that I choose…

Is it not sharing your bread with the hungry,

bringing the afflicted and the homeless into your house;

Clothing the naked when you see them,

and not turning your back on your own flesh?

O God, author of peace and lover of charity,
who adorned Saint Elizabeth of Portugal
with a marvelous grace for reconciling those in conflict,
grant, through her intercession,
that we may become peacemakers,
and so be called children of God.
Through our Lord Jesus Christ, your Son,
who lives and reigns with you in the unity of the Holy Spirit,
one God, for ever and ever. Amen.