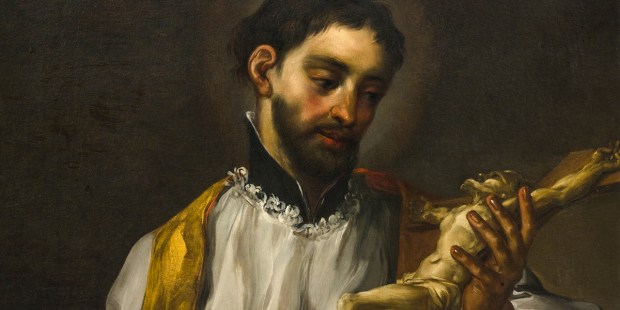 + Aloysius was born in Castiglione, Italy, and was the eldest son and heir of the powerful Gonzaga family.

+ A pious child, Aloysius wanted to please God and seek God’s will above all things. After years of discernment, he entered into a fierce battle with his father who refused to allow Aloysius to fulfill his vocation to enter the Society of Jesus.

+ After great suffering and prayer, Aloysius received the necessary permission and renounced his title and inheritance, entering the Jesuits in Rome.

+ Known for his sense of self-discipline, modesty, and commitment to seeking God’s will in all things, Aloysius was well-liked by his superiors and religious brothers. It was his desire to go and serve in the Society’s missions in Asia.

+ Aloysius contracted a virulent form of plague in March 1591 after picking up a dying man from the street and carrying him to a hospital. Aloysius died after a long and painful illness on June 21, at the age of 23.

+ Saint Aloysius Gonzaga was canonized in 1726. Since the time of his canonization, he has been honored as the patron saint of youth and, more recently, of those suffering from HIV/AIDS and their caregivers.

“So what did Aloysius do with his lovely light? From surface facts, he did not contribute to world peace or environmental causes. He did nothing to save the dolphins or the Lombardy poplar or promote democratic government. Aloysius’ mission was in being rather than doing, and in following God’s will.”—Ethel Pochocki

Father of love, giver of all good things, in Saint Aloysius you combined remarkable innocence with the spirit of penance. By the help of his prayers may we who have not followed his innocence follow his example of penance. Grant this through our Lord Jesus Christ, your Son, who lives and reigns with you and the Holy Spirit, one God, for ever and ever. Amen.