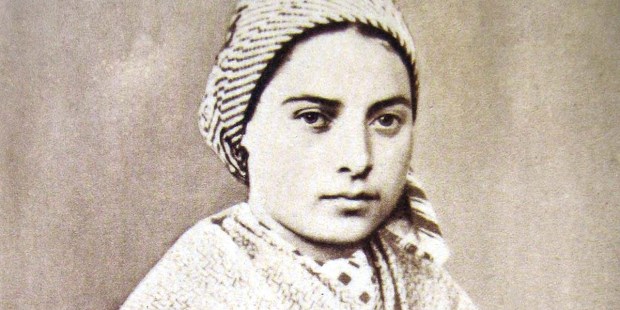 + Marie Bernadette Soubirous was born in Lourdes, France. A simple girl with a great deal of common sense, she suffered from asthma as a child and was often ill. This was only exacerbated by her family’s severe poverty.

+ On February 11, 1858, she experienced the first in a series of visions of the Virgin Mary in a grotto at Massabielle. The message she received was a call for penance for the conversion of sinners, as well as a request that the grotto become a place of pilgrimage.

+ A chapel was constructed at the site in 1862 and Lourdes soon became the most popular pilgrimage site in Europe.

+ Bernadette hated the attention she received from pilgrims and curious visitors. In 1866, she was accepted into the community of the Sisters of Notre Dame de Nevers.

+ After living humbly and simply in her community, embracing a straightforward approach to holiness based on her community’s rule, Saint Beradette died after several years of illness of April 16, 1879. In considering her cause for canonization, the Church honored her for her life of prayer, devotion, and service and not for her visions. She was canonized in 1933.

“The prayer of the Rosary, so dear to Bernadette and to Lourdes pilgrims, concentrates within itself the depths of the Gospel message. It introduces us to contemplation of the face of Christ. From this prayer of the humble, we can draw an abundance of graces.”—Pope Benedict XVI

O God, protector and lover of the humble, you have bestowed upon your servant, Marie Bernadette, the favor of beholding the Immaculate Virgin Mary and of conversing with her’ grant, we beseech you, that walking through the simple paths of faith, we may deserve to behold you in heaven. Through Christ our Lord. Amen.