Thursday, April 2
Saint of the Day: St. Francis of Paola

Invoked against fire and plague 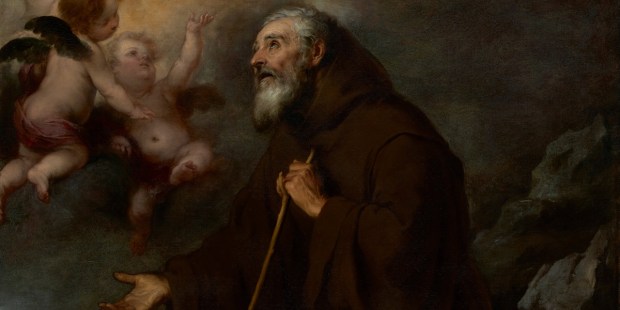 + Francis was in Paola, Italy, to elderly parents who had prayed through the intercession of Saint Francis of Assisi that God would bless them with a child.

+ After making a pilgrimage to Rome and Assisi, Francis became a hermit in a cave near Paola. Although he was still a young man, he attracted followers and by 1450 they had become so numerous that he composed a rule of life for them, calling them the “Hermits of St. Francis of Assisi.”

+ The new order was approved in 1474 and later renamed “Franciscan Order of Minim Friars,” seeing themselves as the last and least—Minim—in the Church.

+ Francis was honored as a prophet and miracle worker, but was also a champion of the poor and a reformer chosen to represent the papacy in various disputes, helping to prevent wars and bring peace where divisions occurred.

+ Saint Francis of Paola died on Good Friday, April 2, 1507, and was canonized in 1519. Because he was seen as a powerful adversary of the devil and demonic forces, he is invoked as special protector against fire.

“Fix your minds, then, on the passion of our Lord Jesus Christ. Inflamed with love for us, he came down from heaven to redeem us. For our sake he endured every torment of body and soul and shrank from no bodily pain. He himself gave us an example of perfect patience and love. We, then, are to be patient in adversity.”—Saint Francis of Paola

To learn about the Minim Fathers and Brothers, visit: http://www.allsaintsla.com/ministries/pastoral-care-of-the-sick

O God, exaltation of the lowly,

who raised Saint Francis of Paola to the glory of your Saints,
grant, we pray, that by his merits and example
we may happily attain the rewards promised to the humble.
Through our Lord Jesus Christ, your Son,
who lives and reigns with you in the unity of the Holy Spirit,
one God, for ever and ever. Amen.