Thursday, April 9
Saint of the Day: Holy Thursday of the Supper of the Lord

“I have set you an example” 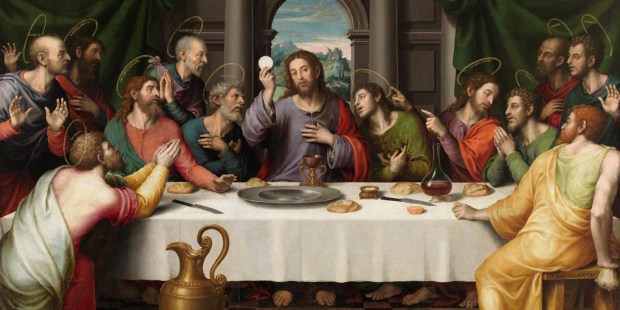 + Traditionally two masses are celebrated on this day: the Chrism Mass (during which the diocesan bishop blesses the holy oils and sacred chrism for the coming year, and which is often transferred to a different day in Holy Week in many dioceses) and the Evening Mass of the Lord’s Supper.

+ The Evening Mass of the Lord’s Supper marks the beginning of the Paschal Triduum, the most solemn days of the entire Church Year.

+ This Mass celebrates not only the gift of the Eucharist, but also includes the ceremonial washing of feet called the Mandatum (from the Latin word for “command”).

+ On Holy Thursday the Church invites us to reflect on Jesus’ absolute gift of himself to his followers in the gift of the Eucharist and symbolized by his humble service. We are called to imitate him in his service and self-offering.

“This is the way to wash feet; it is being at the service of others. Once, the disciples were arguing amongst themselves as to who was the greatest, the most important one. And Jesus said: ‘Let the greatest among you become as the youngest, and the leader as one who serves.’ And this is what He did. This is what God does with us. He serves us. He is the servant. All of us who are ‘poor things.’ Everyone! But he is great. He is good. And he loves us as we are. For this reason, let us think about God, about Jesus, during the ceremony. It is not a ceremony of folklore. It is a gesture to remember what Jesus gave. Following this, he took bread and he gave us His body. He took wine and he gave us His blood. This is how God’s love is. Today, let us only think of God’s love.”—Pope Francis

O God, who have called us to participate
in this most sacred Supper,
in which your Only Begotten Son,
when about to hand himself over to death,
entrusted to the Church a sacrifice new for all eternity,
the banquet of his love,
grant, we pray,
that we may draw from so great a mystery,
the fullness of charity and of life.
Through our Lord Jesus Christ, your Son,
who lives and reigns with you in the unity of the Holy Spirit,
one God, for ever and ever. Amen.

(from The Roman Missal: Collect for the Evening Mass of the Lord’s Supper)