Martyred 4 days after the pope 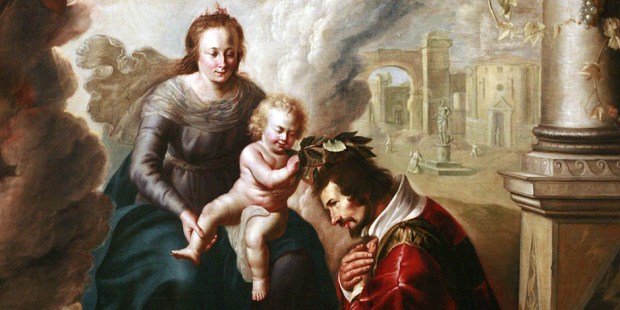 + Lawrence was a deacon of the Church of Rome who served under Pope Saint Sixtus II.

+ Following the arrest of Pope Sixtus and a group of deacons, Lawrence was ordered to collect the Church’s treasure and to hand it over to the civil authorities. On the appointed day, Lawrence presented the poor—the Church’s true treasure—to the imperial prefect.

+ Saint Lawrence was martyred on August 10, 258, by being roasted to death on a gridiron.

+ Originally buried in a field outside of Rome, the emperor Constantine later built a basilica in his honor. Devotion to Saint Lawrence spread quickly throughout the Church and his name is included in the Roman Canon (the First Eucharistic Prayer).

+ Saint Lawrence is honored as one of the patron saints of deacons and of the poor.

Pope Saint Sixtus II and his companions (the deacons Januarius, Vincentius, Magnus, Stephanus, Felicissimus, and Agapitus) were martyred on August 6, 258, as they celebrated the liturgy in the Catacomb of St. Callistus. Their commemoration is celebrated on August 7.

“Just as Christ laid down his life for us, so we ought to lay down our lives for the brethen.My brethren, Lawrence understood this and, understanding, he acted on it. Just as he had partaken of a gift of self at the table of the Lord, so he prepared to offer such a gift. In his life he loved Christ; in his death he followed in his footsteps.”—Saint Augustine of Hippo

O God, giver of that ardor of love for you

by which Saint Lawrence was outstandingly faithful in service
and glorious in martyrdom,
grant that we may love what he loved
and put into practice what he taught.
Through our Lord Jesus Christ, your Son,
who lives and reigns with you in the unity of the Holy Spirit,
one God, for ever and ever. Amen.