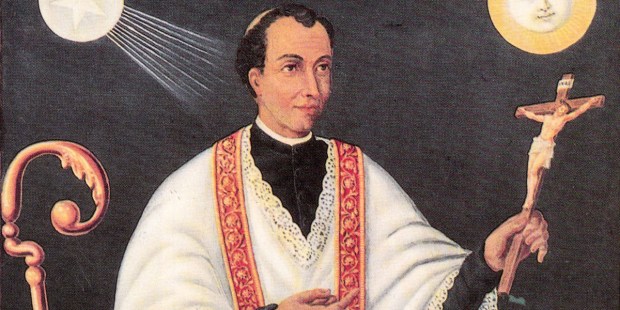 + Joseph was born in Goa, India. After studying under the Jesuits, he received degrees in theology and philosophy. Ordained a priest in 1676, he began living among the poor and acquired a reputation as a popular preacher and confessor.

+ He soon opened a “Latin school” for prospective seminarians, but began to feel drawn to serve as a missionary to the small underground Catholic community in Sri Lanka.

+ His diocesan superiors refused to allow him to go to Sri Lanka. As he continued to discern his vocation, Joseph entered the Congregation of the Oratory (the Oratorians) and, in 1686, he began his mission to Sri Lanka’s Catholics, who were then suffering persecution under the Dutch (Protestant) colonial authorities.

+ Father Vaz conducted a clandestine ministry, working in disguise as he traveled from village to village preaching and celebrating Mass. After he spent time in prison because of his missionary work, he was joined by other Oratorian priests who built on the strong foundation laid by Father Vaz.

+ Honored for both Catholics and Protestants for his tireless works of charity, wisdom, and holiness, Joseph Vaz died at Kandy, Sri Lanka, on January 16, 1711. Honored as the “Apostle of Sri Lanka,” he was canonized in 1715.

“In Saint Joseph we see a powerful sign of God’s goodness and love for the people of Sri Lanka. But we also see in him a challenge to persevere in the paths of the Gospel, to grow in holiness ourselves, and to testify to the Gospel message of reconciliation to which he dedicated his life.”—Pope Saint John Paul II

Look, O Lord, upon your family, which blessed Joseph engendered by the Word of truth and fed with the Sacrament of life, that your grace, which has made them faithful through his ministry, may through his prayers make them fervent in charity. Through our Lord Jesus Christ, your Son, who lives and reigns with you in the unity of the Holy Spirit, one God, for ever and ever. Amen.

(from The Roman Missal: Common of Pastors—For Founders of Churches)