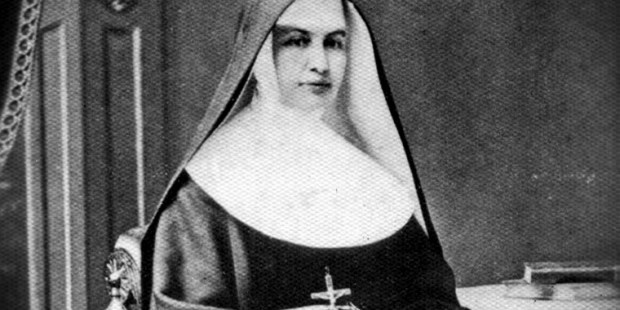 + Barbara Koob was born in German and her family immigrated to the United States in 1840, settling in Utica, New York. It was there that the family name was changed to “Cope.”

+ Barbara was forced to leave school after the eighth grace to help support her family by working in a factory.

+ In 1862, she entered the Franciscan Sisters of Syracuse, New York, receiving the religious name Marianne. After professing religious vows the following year, she worked for several years as a teacher and, later, as superior of St. Joseph’s Hospital. She was eventually elected provincial of her community.

+ Inspired by the work being done among the lepers on the Hawaiian island of Molka’I, Mother Marianne traveled with six companions to Hawaii in 1883, intending to establish a group of sisters to help the Belgian priest. While Mother Marianne planned to stay only a few weeks (to establish the convent and dispensary), she stayed for thirty-five years.

“Marianne Cope showed the highest love, courage and enthusiasm. She is a shining and energetic example of the best of the tradition of Catholic nursing sisters and of the spirit of her beloved Saint Francis [of Assisi].”—Pope Benedict XVI at the canonization of Saint Marianne Cope

The Franciscan Sisters of Syracuse (established in 1860) were one of a number of religious communities founded by Saint John Neumann. Between 2004 and 2007 theses communities came together to form one, larger religious community: the Sisters of St. Francis of the Neumann Communities. Today these sisters serve throughout the United States—and the world—in all areas of education, healthcare, retreat work, immigration advocacy, environmental stewardship, and anti-human trafficking initiatives.

O God, who called us to serve your Son
in the least of our brothers and sisters,
grant, we pray, that by the example and intercession
of the Virgin Saint Marianne Cope,
we may burn with love for you and for those who suffer.
Through our Lord Jesus Christ, your Son,
who lives and reigns with you in the unity of the Holy Spirit,
one God, for ever and ever. Amen.