A father to the poor 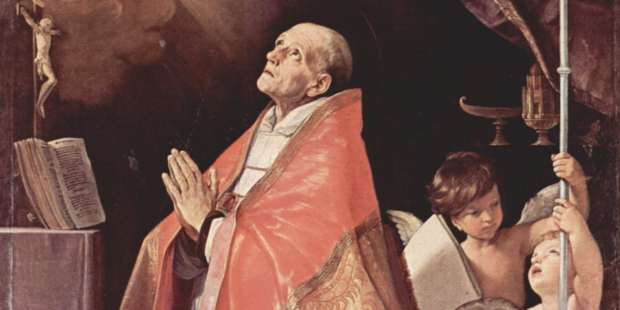 + Andrea was born in Florence, Italy, and was a member of the wealthy and powerful Corsini family.

+ After a wild and extavagent youth, he was inspired by the Carmelite friars he encountered at the church of Santa Maria del Carmine and decided to enter the Carmelite Order.

+ Andrew was ordained a Carmelite priest in 1328 and preached throughout Florence, before being sent for studies at the University of Paris and in Avignon. After completing his studies, he was named prior of his community in Florence in 1332. He would come to be known as the “Apostle of Florence,” because of his apostolic zeal and care for the poor.

+ In 1349, Andrew was named bishop of Fiesole. Upon hearing of his appointment, however, Andrew went into hiding but was prevailed upon to accept the post.

+ As bishop, Andrew recommitted himself to the life of penance and prayer he lived as a Carmelite friar. Because of his skills as a diplomat, he came to be known as a peacemaker and Blessed Pope Urban V sent him to Bologna as papal legate, hoping to heal divisions between the papacy and the people of Bologna.

+ Legend relates that as he celebrated the Mass at Midnight on Christmas 1373, the Blessed Virgin Mary appeared to him told him that he would die on the feast of the Epiphany. Andrew did, in fact die on January 6, 1374, and he was honored as a saint immediately after his death and many miracles were attributed to his intercession.

+ Saint Andrew Corsini was canonized in 1629. Although he is named in the Roman Martyrology on February 4, the Carmelite Order celebrates his feast on January 9.

I was the eyes of the blind,

and feet to the lame was I.

I was a father to the poor;

the complaint of the stranger I pursued.—Job 29:15-16; Communion antiphon for the Carmelite feast of Saint Andrew Corsini

On this day, the people of the Philippines honor the Lord Jesus under the title “The Black Nazarene.” This devotion centers around a life-sized statue of Jesus carrying the cross. The image was created in Mexico and was brought by the Augustinian Fathers to the Philippines. Many miracles healings are associated with the image which remains an important icon of the Christian Faith in the Philippines.

God our Father, you reveal that those who work for peace will be called your children. Through the prayers of St Andrew Corsini, who excelled as a peacemaker, help us to work without ceasing for that justice which brings true and lasting peace. We ask this through our Lord Jesus Christ, your Son, who lives and reigns with you and the Holy Spirit, one God, for ever and ever. Amen.

(from The Carmelite Sacramentary)