Thursday, July 9
Saint of the Day: St. Augustine Zhao Rong and the Martyrs of China 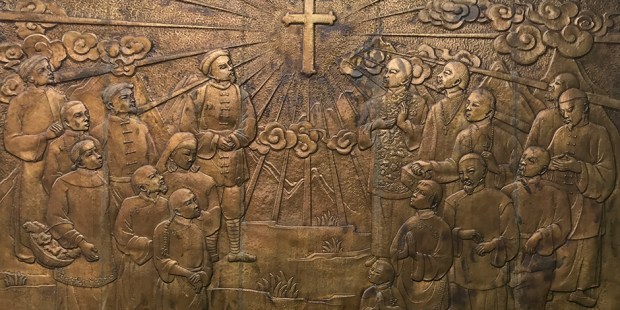 + This group of martyrs includes 120 women, men, and children, among whom were 85 Chinese, who gave their lives in witness to their Catholic faith.

+ Martyred over the course of several centuries, this diverse group, which also includes 33 European missionaries, witnesses to the courage and constancy of Chinese Christians.

+ Saint Augustine Zhao Rong, for whom the group of martyrs is named, was a native Chinese priest of the Su-Tchuen province. Arrested because of his Christian faith and ministry, he died in prison in 1815.

+ Canonized during the Jubilee Year of 2000, these martyrs are honored collectively as the patrons of China.

“Chinese men and women of every age and state, priests, religious and lay people, showed the same conviction and joy, sealing their unfailing fidelity to Christ and the Church with the gift of their lives.”—Pope Saint John Paul II

On this day the Church also honors a group of martyred priests and religious brothers who were killed by Calvinist zealots on July 9, 1572, in Gorkum, the Netherlands. Canonized in 1867, the martyrs included members of the secular clergy, as well as members of the Norbertines, Franciscans, Dominicans and Augustinians.

turn our weakness into strength.
As you gave Augustine Zhao Rong and the martyrs of China
the courage to suffer death for Christ,
give us the courage to live in faithful witness to you.
Grant this through our Lord Jesus Christ, your Son,
who lives and reigns with you and the Holy Spirit,
one God, for ever and ever. Amen.