One of the Twelve Apostles of Ireland 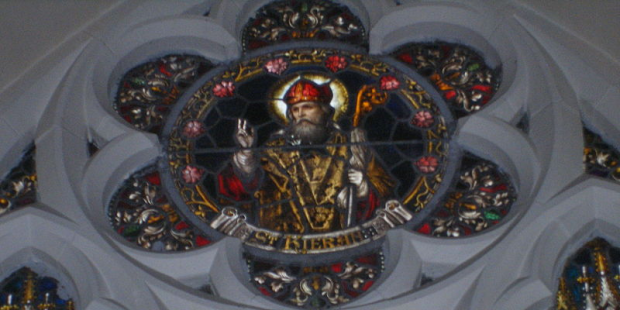 + Kieran (or Ciarán) was born on Cape Clear Island is considered to be the first saint born in Ireland. His life has come down to us in four early biographies, two written in Latin and the other two written in Irish.

+ It is believed that Kieran—already a Christian—left Ireland sometime before the arrival of Saint Patrick. He traveled to the continent and studied in Tours, France, and in Rome.

+ After returning to Ireland, he became a hermit at Saighir (or Seir Kieran). He was soon joined by a group of disciples, whom Keiran organized into a monastic community. It is said that his mother, Liadan, brought a group of women to Saighir and established a community of women who supported the monks.

+ Although there is some debated about when Kieran was ordained bishop, it seems likely that he was consecrated bishop by Saint Patrick and served as the first bishop of Ossory.

+ Saint Kieran died in the sixth century and was honored as saint immediately after his death.

“What I say to you in the darkness speak in the light, says the Lord; what you hear whispered proclaim on the housetops.”—Matthew 10:27

Almighty ever-living God, who have made sacred this day's rejoicing at the glorification of blessed Kieran, graciously grant that we may strive always to keep and to put into practice the faith which, with unquenchable zeal, he strove to proclaim. Through our Lord Jesus Christ, your Son, who lives and reigns with you in the unity of the Holy Spirit, one God, for ever and ever. Amen.

(from The Roman Missal: Common of Pastors—For Missionaries)