Thursday, October 1
Saint of the Day: Thérèse of Lisieux

Saint of the Little Way 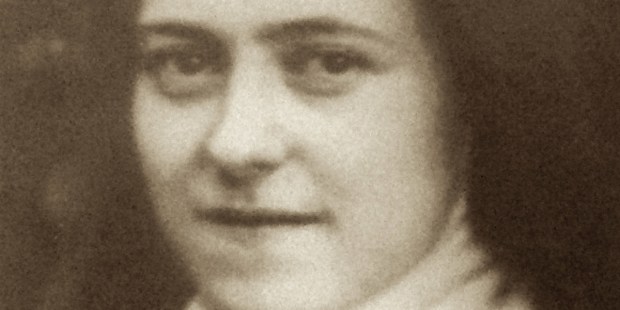 + Thérèse Martin was born into a devout Catholic family and entered the Carmel (the name of a Carmelite monastery for women) in Lisieux, France, when she was fifteen years old. She received the name “Thérèse of the Child Jesus;” she herself would later request that “and of the Holy Face” be added to her religious name.

+ After making her vows three years later, she served her community as sacristan and novice-mistress.

+ The first sign of the tuberculosis which would claim her life appeared in 1894.

+ Taking as her personal motto “Love is repaid by love alone” (Saint John of the Cross), Thérèse found the courage to endure hours and days of spiritual darkness that few saints have suffered. Love for the Father, expressed in childlike simplicity and trust—combined with a deep understanding of the mystery of the Cross—formed the basis of her “Little Way.”

+ Saint Thérèse of the Child Jesus and of the Holy Face died in her monastery on September 30, 1897, at the age of twenty-four. She was canonized in 1925 and declared a Doctor of the Church in 1997.

+ The parents of Saint Thérèse, Louis and Zelie Martin, were canonized in 2015. She is honored (with Saint Francis Xavier) as the patron saint of foreign missions.

“I saw and realized that love sets off the bounds of all vocations, that love is everything, that this same love embraces every time and every place. In one word, that love is everlasting… O Jesus, my love, at last I have found my calling: my call is love,” she writes. “In the heart of the Church, my mother, I will be love, and thus I will be all things, as my desire finds its direction.”—Saint Thérèse of Lisieux

On October 1 we also remember the deacon and hymnwriter Saint Romanus “the Melodist.” Many of his liturgical hymns are still used in the Eastern Church, most especially his great “Akathist Hymn” in honor of the Mother of God. Saint Romanos died in 556 and is honored as a patron of church singers.

The Discalced Carmelite Friars (Province of St. Therese of the Child Jesus): www.caremlitefriarsocd.com

The Carmelite Sisters of St. Therese of the Infant Jesus: www.oksister.com

The Carmelite Nuns of the Monastery of Our Lady and St. Therese (Carmel, CA): www.carmelitesistersbythesea.org

The Carmelite Nuns of the Carmel of St. Therese of the Child Jesus (Allentown, PA): www.carmelite-nuns.com

The Discalced Carmelite Nuns of the Monastery of St. Therese of the Child Jesus (Clinton, Township, MI): www.carmelctwp.org

The Discalced Carmelite Nuns of the Carmel of St. Therese of Lisieux (Loretto, PA): www.lorettocarmel.org

The Discalced Carmelite Nuns of the Monastery of Our Lady of Mt. Carmel and St. Therese of the Child Jesus (Barrington, RI): www.barringtoncarmel.com

O God, who open your Kingdom
to those who are humble and to little ones,
lead us to follow trustingly in the little way of Saint Thérèse,
so that through her intercession
we may see your eternal glory revealed.
Through our Lord Jesus Christ, your Son,
who lives and reigns with you in the unity of the Holy Spirit,
one God, for ever and ever. Amen.