Tuesday, April 21
Saint of the Day: St. Anselm of Canterbury 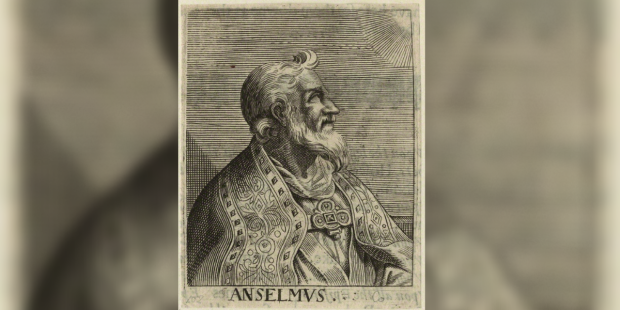 + Anselm was born in the Piedmont region of Italy. When he was 27, he entered the English Benedictine abbey of Bec (in Normandy), becoming the community’s abbot in 1078.

+ As abbot, Anselm was beloved as a preacher and reformer. In 1093, he succeeded his former teacher, Lanfranc, as archbishop of Canterbury.

+ Shortly after his episcopal consecration, Anselm came into conflict with King William Rufus, whose unjust policies forced Anselm to leave England. After traveling to the great abbey at Cluny and to Rome, he returned to England only after learning of the king’s death.

+ Conflicts with the new king forced Anselm to flee to Rome. Pope Paschal II defended Anselm’s claims to authority over the English church. He returned to Canterbury in 1106 and died there on April 21, 1109.

+ Known as a man of recollection and learning, Anselm’s writings have had a profound impact on Catholic thought and he is honored as the “Father of Scholasticism.”

+ Especially remembered for his Prosologion, the treatise Cur Deus Homo, and his ontological argument for the existence of God, Anselm was declared a Doctor of the Church in 1720.

“My soul, have you found what you are looking for? You were looking for God, and you have discovered that he is the supreme being, and that you could not possibly imagine anything more perfect. You have discovered that this supreme being is life itself, light, wisdom, goodness, eternal blessedness and blessed eternity. He is everywhere, and he is timeless.”—Saint Anselm of Canterbury, Proslogion

On this day, the people of Morelia, Mexico, honored the Christ Child under the title Santo Niño de la Salud (“Holy Child of Good Health”). The miraculous image was discovered in 1939 and veneration to Christ under this title was approved by archbishop and the image was solemnly crowned in 1944. A religious community—The Missionaries of the Holy Infant of Good Health—were founded in Morelia in 1970 and currently serve in Mexico, the United States, and Italy.

O Lord our God, grant us grace to desire You with our whole heart; that, so desiring, we may seek, and, seeking, find You’ and so finding You, may love You; and loving You, may hate those sins from which You have redeemed us. Amen.

(from the writings of Saint Anselm of Canterbury)