Author of True Devotion to Mary 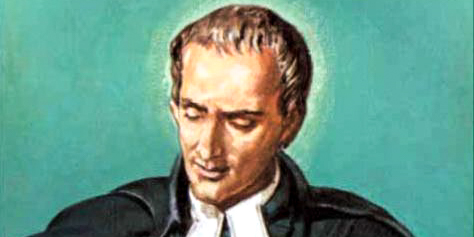 + Louis was born to a poor family in Montfort, France.

+ After his ordained a priest in 1700, he was assigned to serve as chaplain of a hospital in Poitiers, but his administrative style made him unpopular with the staff and he was forced to resign his post. Before leaving the hospital, however, he established the community of the Daughters of Wisdom, drawing the community’s first members from the hospital’s poor patients.

+ In 1706, he was appointed to serve as a Missionary Apostolic by Pope Clement XI and he began to travel throughout Brittany, conducting parish missions and working among the poor. To help provide an education for poor children, he established the Brothers of St. Gabriel around the year 1711.

+ Louis gathered together a group of priests and organized another new community: the Company of Mary (more commonly known as the Montfort Fathers). Today the priests and brothers of the community work in a variety of fields in several countries.

+ In his preaching, Louis stressed the need for conversion, and placed great emphasis on the special place that the Mother of God should hold in the lives of Christians. Among his many books are True Devotion to Mary and The Secret of the Rosary.

“The message of the cross is foolishness to those who are perishing,
but to us who are being saved it is the power of God.
For it is written:

I will destroy the wisdom of the wise,
and the learning of the learned I will set aside.”—1 Corinthians 1:18

The priests and brothers of the Company of Mary: www.montfortusa.org

The Daughters of Wisdom: https://www.daughtersofwisdom.org/

O God, who willed to direct the steps of the Priest Saint Louis
along the way of salvation and of the love of Christ,
in the company of the Blessed Virgin,
grant us, by his example,
that, meditating on the mysteries of your love,
we may strive tirelessly for the building up of your Church.
Through our Lord Jesus Christ, your Son,
who lives and reigns with you in the unity of the Holy Spirit,
one God, for ever and ever. Amen.