Tuesday, December 10
The Blessed Virgin Mary ~ Our Lady of Loreto

“Imitate the virtues of that perfect disciple of the Gospel, the Virgin Mother” 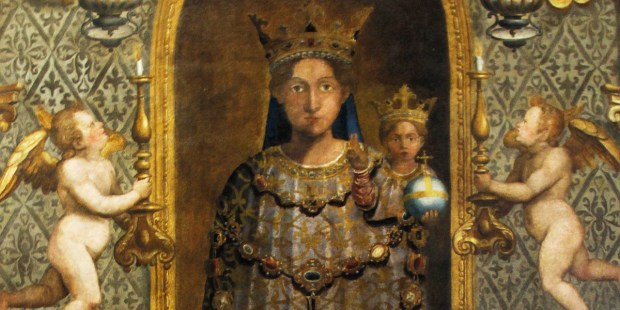 The meaning behind the celebration

+ Since the middle ages, Christians have honored Mary under the title “Our Lady of Loreto,” inspired by the shrine of the “Holy House” in Loreto, Italy.

+ According to long-standing tradition, the house in which the angel Gabriel appeared to the Blessed Mother at the time of the annunciation was miraculously transported to Italy from the Nazareth in the 13th century. This shrine has been visited by countless pilgrims, including dozens of saints, such as Saint Bridget of Sweden, Saint Aloysius Gonzaga, Saint Benedict Joseph Labre, Saint Alphonsus Liguori, Saint John Henry Newman, Saint Thérèse of Lisieux, and Pope Saint John Paul II.

+ Because of this miraculous origins of the shrine, Our Lady of Loreto has come to be honored as the patron saint of pilots and aviators.

+ The current image of Our Lady of Loreto honored in the shrine of the Holy House was installed in 1922. It is carved from a cedar of Lebanon harvested from the grounds of Vatican City, replacing the image that was destroyed by fire in 1921.

+ Pope Saint John XXIII visited the shrine of Our Lady of Loreto in October 1962 to ask the intercession of the Blessed Virgin for the Second Vatican Council.

+ Pope Francis added the commemoration of Our Lady of Loreto to the General Roman Calendar earlier this year, recognizing that “this celebration will help all people, especially families, youth and religious to imitate the virtues of that perfect disciple of the Gospel, the Virgin Mother, who, in conceiving the Head of the Church also accepted us as her own.”

“It is precisely here at Loreto that we have the opportunity to attend the school of Mary who was called ‘blessed’ because she ‘believed’ (Lk 1:45). This Shrine, built around her earthly home, preserves the memory of the moment when the angel of Lord came to Mary with the great announcement of the Incarnation, and she gave her reply. This humble home is a physical, tangible witness to the greatest event in our history, the Incarnation; the Word became flesh and Mary, the handmaid of the Lord, is the privileged channel through which God came to dwell among us (cf. Jn 1:14).”—Pope Benedict XVI

– The Institute of the Blessed Virgin Mary (the Loretto Sisters): https://ibvm.us/

– The Sisters of Loretto: https://www.lorettocommunity.org/

– The Carmel of St. Therese of Lisieux (Loretto, PA): https://lorettocarmel.org/

O God, who, fulfilling the promise made to our Fathers,
chose the Blessed Virgin Mary
to become the Mother of the Savior,
grant that we may follow her example,
for her humility was pleasing to you
and her obedience profitable to us.
Through our Lord Jesus Christ, your Son,
who lives and reigns with you in the unity of the Holy Spirit,
one God, for ever and ever. Amen.