Tuesday, June 2
Saints of the Day: Marcellinus and Peter 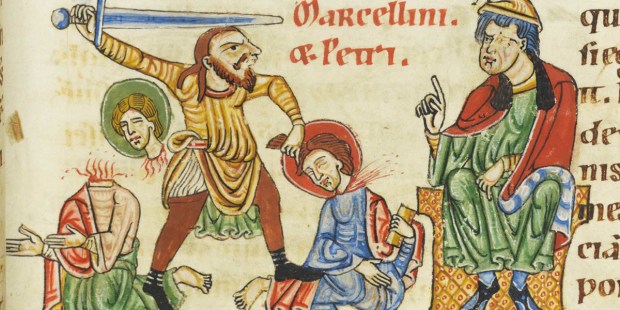 + Marcellinus, a Roman priest, and Peter, an exorcist, were killed during the persecutions of the Emperor Diocletian.

+ After being imprisoned, they were condemned to death and taken in secret to a forest called the Silva Negra where, after being forced to dig their own graves, they were beheaded.

+ Their bodies were later recovered and they were buried in the catacomb that was later renamed in their honor.

+ The Emperor Constantine built a basilica over their grave and his mother, Saint Helen, was buried there in 330.

“In Christ and with Christ the martyrs disarm the principalities and powers and share in his triumph over them, for their share in Christ’s sufferings makes them sharers also in the mighty deeds those sufferings accomplished.”—Origen

O God, who surround us with protection

through the glorious confession
of the Martyrs Saints Marcellinus and Peter,
grant that we may profit by imitating them
and be upheld by their prayer.
Through our Lord Jesus Christ, your Son,
who lives and reigns with you in the unity of the Holy Spirit,
one God, for ever and ever. Amen.