“Your reward will be great in heaven” 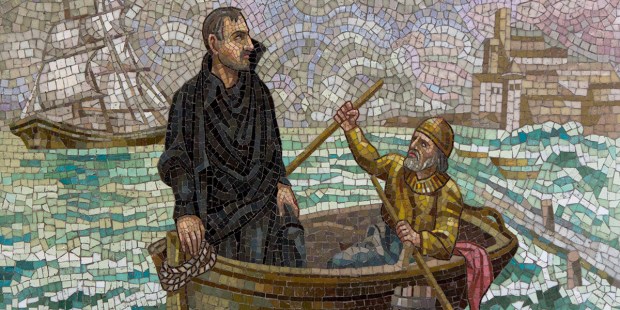 + John was born to a noble Scottish family in Drum, Grampian, Scotland. Although he was raised as a Calvinist, he converted to Catholicism at the age of 17.

+ He entered the Society of Jesus and was ordained a priest in 1610.

+ This was a period of great suffering for Scotland’s Catholics, but the Jesuits were open to sending missionaries to provide for the persecuted Catholic population.

+ John asked repeatedly to be sent to his native Scotland, and he was finally given permission to return in 1613. He carried out a clandestine ministry in Edinburgh and Glasgow, disguising himself as a soldier named “Watson.”

+ After 11 months, he was captured and severely tortured in an effort make him give up the names of active Catholics. He was ultimately convicted of treason (for being loyal to the pope) and for denying the king’s spiritual supremacy.

“Blessed are you when they curse you and persecute you and speak all kinds of falsehoods against you, because of me; rejoice and be glad, your reward will be great in heaven.”—Matthew 5:11-12a

Lord God, you revealed the power of the Holy Spirit in the life and death of your martyr Saint John. Through his example and prayers give us strength to serve the Church under the banner of the Cross, and to carry out in every land the work entrusted to us by the successor of Saint Peter. We ask this through our Lord Jesus Christ, your Son, who lives and reigns with you in the unity on the Holy Spirit, one God, for ever and ever. Amen.

(from Supplement to the Divine Office for the Society of Jesus)