“The Eucharist is a never-ending sacrifice” 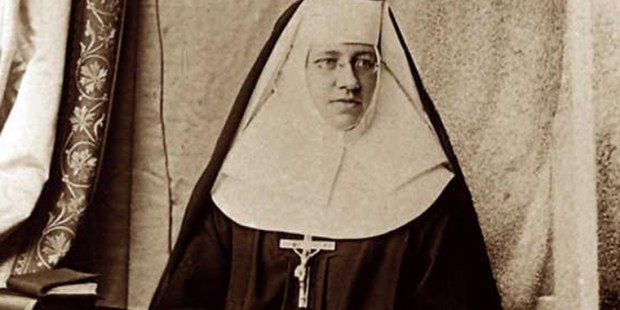 + Katharine was born in Philadelphia, Pennsylvania, into one of the wealthiest families in America. While visiting Europe as a young woman, she worked to recruit priests and religious to serve the needs of Native Americans.

+ During this same trip, during a papal audience, Pope Leo XIII suggested that Katharine herself become a missionary. The following year, she established schools in the Dakotas, Wyoming, Montana, California, Oregon, and New Mexico.

+ Opening a novitiate in Philadelphia, she received 21 new sisters in the first year. The community established its first mission in New Mexico.

+ In the years that followed, Katharine opened other missions and schools, including Xavier University in New Orleans.

+ Following a heart attack in 1935, Mother Drexel was forced to return to the motherhouse. There, she dedicated the remainder of her life to prayer and contemplation. She died on March 3, 1955, and was canonized in 2000.

“The Eucharist is a never-ending sacrifice. It is the Sacrament of love, the supreme love, the act of love.”—Saint Katharine Drexel

On March 3 we also remember Blessed Concepcion Cabrera de Armida. A wife and mother of nine children, she established a number of charitable works and two religious communities following her husband’s death. Known for her charity and mystical writings, Blessed Concepcion died in Mexico City in 1937 and was beatified in 2019.

To learn more about the Sisters of the Blessed Sacrament, visit: http://www.katharinedrexel.org/sisters-of-the-blessed-sacrament/

God of love,
you called Saint Katharine Drexel
to teach the message of the Gospel
and to bring the life of the Eucharist
to the Native American and African American peoples;
by her prayers and example,
enable us to work for justice
among the poor and the oppressed,
and keep us undivided in love
in the eucharistic community of your Church.
Through our Lord Jesus Christ, your Son,
who lives and reigns with you in the unity of the Holy Spirit,
one God, for ever and ever. Amen.