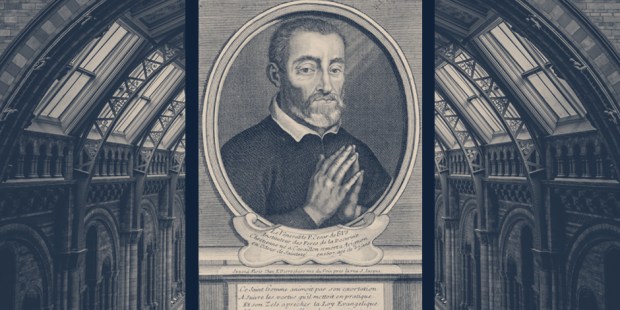 Priest and Founder of the Fathers of Christian Doctrine (1544-1607)

+ Caesar was born in Cavaillon, France, and after years of military service—which included taking part in the French “Wars of Religion” and the witnessing the “St. Bartholomew’s Day Massacre” of French Protestants—he tried to set out on a literary career by writing poetry and painting.

+ Up to this point in his life, he lived as a fairly wealthy young man, more interested in worldly pleasures than his spirituality.

+ A serious illness caused him to pay more attention to his spiritual life and he decided to become a priest. He began to travel around teaching catechism in out-of-the-way and neglected places. Caesar believed that poor faith formation of the poor was a great weakness of the Church.

+ Inspired by the teachings of the Council of Trent (1545-1563) and the life of Saint Charles Borromeo, Caesar began to focus his ministry on the catechesis of families and not just children.

+ In time, he established a new religion community to share in this work: the Fathers of Christian Doctrine. In 1602, he founded a branch of the community for women which came to be known as the “Ursuline Sisters of Providence.”

+ Caesar de Bus was also remembered for his spirit of penance and the constant struggle to overcome the feelings and habits of his earlier life of pleasure. He wanted to make God’s love known by uniting all the efforts of his life to the Divine Will. He died on Easter Sunday, April 15, 1607, and was beatified in 1975.

+ In his address at the beatification, Blessed Pope Paul VI observed that Blessed Caesar’s genius was his in his ability to adapt doctrine to the minds and “readiness of his listeners and readers” to receive the Good News. His teachings were grounded in the life and prayer of the Church and, for this reason, he has come to be regarded as a patron for modern catechists.”

“Everything in us must catechize and our conduct in life must make us living catechisms.”—Blessed Cesar de Bus

O God, who raised up blessed Caesar in your Church to show others the way of salvation, grant us, by his example, so to follow Christ the master, that we may come with our neighbor into your presence. Through our Lord Jesus Christ, your Son, who lives and reigns with you in the unity of the Holy Spirit, one God, for ever and ever. Amen.