Patron saint of soldiers and the Boy Scouts 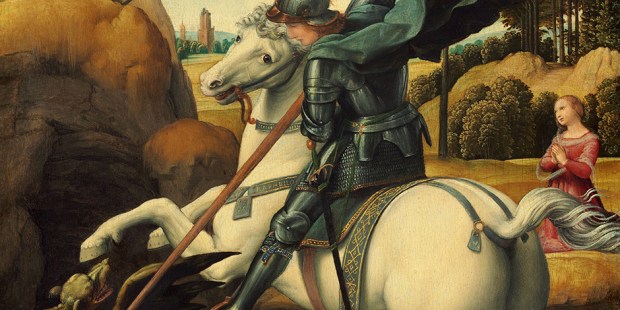 + Best known as the “Slayer of Dragons,” Saint George was a genuine martyr who died in Lydda (modern-day Lod in Israel) around the year 303. No other details of his life have survived.

+ In the Middle Ages, Saint George became one of the most popular saints and devotion to him is especially strong in the Eastern Church where he is honored as “the Great Martyr.”

+ Saint George is also honored in the Islamic tradition as prophet.

+ Saint George is among a group of saints that became known as the “Fourteen Holy Helpers.” Devotion to these “auxiliary” saints became popular during the Middle Ages and the saints were often invoked for protection against the plague and other illnesses.

“Our joy in today’s feast is heightened by our joy in the glory of Easter… Truly, we must be cleansed of the stains of our past sins and be resplendent in the virtue of our new way of life. Then we can be confident of celebrating Easter worthily and of truly following the example of the blessed martyrs.”—Saint Peter Damian

On this day the Church also celebrates the bishop and martyr Saint Adalbert of Prague. A Benedictine monk and missionary, Adalbart proclaimed the Gospel in an area that now includes the Czech Republic and parts of Poland. He suffered martyrdom in 997.

Extolling your might, O Lord,
we humbly implore you,
that, as Saint George imitated the Passion of the Lord,
so he may lend us ready help in our weakness.
Through our Lord Jesus Christ, your Son,
who lives and reigns with you in the unity of the Holy Spirit,
one God, for ever and ever. Amen.