Author of Confessions and The City of God 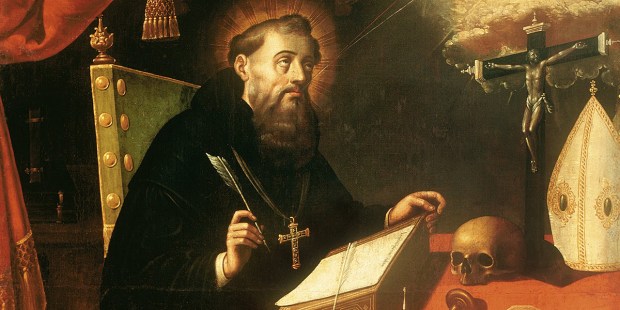 + Augustine was born in North Africa and was the son of Saint Monica and Patricius.

+ A lifelong learner, Augustine’s early life was marked by experimentation, speculation, and periods of sin and doubt. For a time he embraced the Manichean Heresy but through the prayers of his mother and the influence of Saint Ambrose, whom he met in Milan, Italy, Augustine was baptized in 387. He was ordained a priest in 391.

+ In 395, Augustine was named bishop of Hippo (modern-day Annaba, Algeria), becoming the spokesman of the Church in North Africa.

+ As bishop, Augustine guided his flock for 34 years, instructing them by his teaching and writing. He is especially honored for his highly developed, careful explanations of the Faith, as well as his Confessions, The City of God, and various treatises and sermons.

+ Saint Augustine died in 430 and was honored as a saint immediately after his death.

“If you should ask me what are the ways of God, I would tell you that the first is humility, the second is humility, and the third is humility.”—Saint Augustine of Hippo

While bishop, Augustine imagined a way of life in which members of the clergy would live together in community, supporting one another in the common life of prayer and ministry. This prepared the way for a new religious order now known as the Augustinians.

To learn about the Augustinian Province of St. Thomas of Villanova, visit: www.augustinian.org

To learn about the Augustinian Midwest Province, visit: www.midwestaugustinians.org

To learn about the Augustinian Province of St. Augustine, visit: www.osa-west.org

To learn about the priests and brothers of the Augustinians of the Assumption, visit: www.assumption.us

Renew in your Church, we pray, O Lord,
the spirit with which you endowed
your Bishop Saint Augustine
that, filled with the same spirit,
we may thirst for you,
the sole fount of true wisdom,
and seek you, the author of heavenly love.
Through our Lord Jesus Christ, your Son,
who lives and reigns with you in the unity of the Holy Spirit,
one God, for ever and ever. Amen.